We are in for a rough week. Looking at the forecast I have to think that last weekend was the last one for truly spectacular system-wide riding. With a couple of feet of snow on the ground we are not likely to lose everything, but plowed areas like roads and parking lots are likely to go away.

Today it is sunny, but there is a wind. That will help some. We will still get into the low 30s. It is all downhill from there. Tomorrow the forecast is for sunny and 41.

Tuesday through Thursday look really bad. There is a storm coming that will bring 40+ temperatures and an inch or more of rain. The GFS model has us right on the edge of the 2″ mark for rainfall. The TV says 57 for a high in Green Bay Thursday. The NWS says 51 for around here, but that is bad enough. I don’t know how this cartoon ends but it sure looks dark from here.

Two things that I am very worried about are roofs caving in and flooding. There was another roof cave-in at a fire department not too far from here yesterday. There will probably be more when an inch or two of rain adds to the weight on roofs.

As far as the flooding I am expecting a bad flood in my work shed. There are 3′ snow piles all around it, flooding is inevitable with it being the low spot. The same thing goes for my woodshed, which is less of a loss since it is about empty.

A big concern is the private road. There is about a 6″ base that will get mushy on top of the bottom ice. Again there are 3-5 foot high snow piles to melt and flood it. At some point I will likely end up using either the snowmobile or the plow truck to get in and out, and eventually the boots.

As far as the trails go I would expect that the typical low spots will start gathering water.

This has been the biggest snow year that I have seen in my time here (since ’99). I am not looking forward to the Spring thaw at all.

The forecast for next weekends high temperatures are for 35, 34, and 38 for Fri, Sat, and Sunday, with 20s for low temperatures.

As far as the long term.. After this week I don’t see any huge thaws on the 16 day GFS model until about the 27th. Then it looks pretty warm.

People have been asking when the trails close. There is no carved in stone date. It is up to the individual clubs and the county club alliances. The latest that I have seen them open was one year we had trails north of Hwy C open the weekend of April 15th. Don’t count on that, but if it could happen where we could ride our northern trails in April it would be this year.

The year that I bought my place (March of ’98) I came up the last weekend of March. We had a pretty good snow overnight, maybe 4-6″. By mid-afternoon the snow was gone except where the trees had shadowed the snow from the sun. The point is that the March sun gets wicked toward the end of the month.

I never did update on Saturday night’s snow… When it finally got here it was quite the storm. Strong gusty winds were driving the snow sideways, and at times it came in big clouds that would cause a momentary whiteout. It was tough driving/riding. In the end I would call it about 2-3″, but in between the snow piles in the driveway it was quite a bit deeper where it drifted in.

Time to make the donuts. Have a good week and thank you for visiting!

It is pretty cool to be in my skin right now. I am eternally grateful to my snowmobiling friends that came to visit me & the Rapids Resort Saturday. I got to meet a lot of really nice people. I am truly blessed. Thank you so much to everyone! 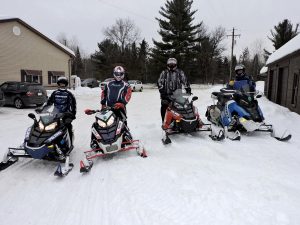 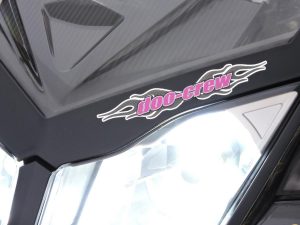 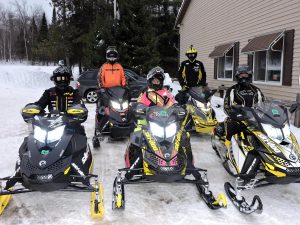 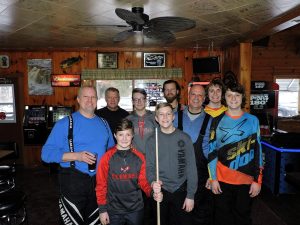 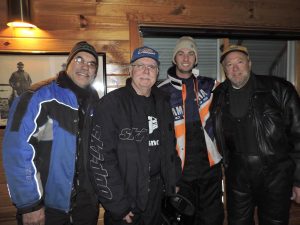 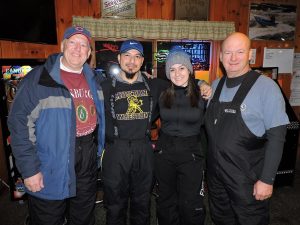 Thank you all again!