I just finished about a 50 mile ride between Silver Cliff, Crooked Lake and Lakewood. I found conditions that were absolutely glorious, and some that was about the minimum that I would ride. Early season conditions sums it up. 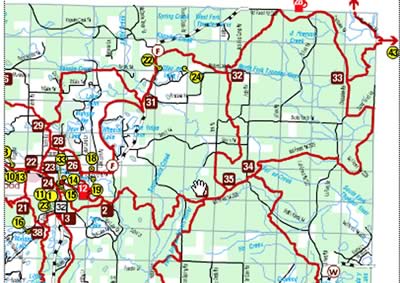 The ride down Landing 11 was a little scrapey. All of the plowed roads are to one extent or another. There is some ice, but more would be a lot better.

The trail across from Landing 11 Rd to Chickadee (43-33) was good enough. There was some snirt in spots and some bumps where there were ruts in the ground, but it was OK.

At 33 I turned north onto Chickadee and was greeted by a hard packed freshly groomed road two lanes wide. There were a few rocks that the groomer turned up, but otherwise it was about a 9.99999997.

Where the trail turns off of Chickadee and goes into the woods there were a lot of leaves, some thin stuff, and a few bumps. Then came more really excellent trail. That is where the perfection shot was taken. From there to the split at 32 was really nice with only a few exceptions.

At 32 I headed south toward the tornado damage area. It didn’t take long before the trails started getting a little thinner and more rugged. It wasn’t horrible, but it was about the minimum that I’d ride. There were some big ruts and a few frozen water crossings and a lot of thin spots and leaves. The ride down to 35 and into Lakewood was also on the thin side with a lot of leaves, but it could be done.

The golf course in Lakewood and other open areas like that were great, and the trail into Lakewood was pretty good. At the split (28) to go north or go into town the north trail was looking a little thin.

I went into town and got gas and I took the F trail home, 26-31. The ride around Wheeler Lake was pretty scrapey. Once I got onto the trail it was freshly groomed hardpack, and it was hard enough that I didn’t make much of an impression. There was a little rugged stuff in the hilly spots between there and Prospect Lodge (31), but most was good.

The ride from 31-32 was mostly really nice with some rugged stuff when the terrain features were causing bumps and dips.The ditch line between Waubee Lake and where the trail goes onto forest roads had some rocks in the trail, be careful there.

Here are the pictures. You can click the enlarge button by the arrows to make them full sized. I am still working on making the captions show up.

Bottom line, there were some great spots and some pretty bad spots.

I am going to post this and come back later tonight for a weather update after some vittles. Be back soon.

My apologies to everyone that I didn’t have an update last night. I got sidelined yesterday afternoon by a big Christmas dinner and woke up at about 7pm.  I usually won’t ride alone after dark, especially on a holiday when my rescuers aren’t around, and on a sled I have only taken 30 miles. At that point I decided that this morning was a better choice.

The good news is that I am already up and running and will be leaving in about 45 minutes.

In response to Jason’s comment.. I am located in Silver Cliff, about 30 miles NW of Crivitz or 80 miles NW of Green Bay. Areas that I ride include Lakewood, Crooked Lake, Athelstane, and up toward Goodman and Dunbar. The pictures from Sunday are from Lakewood and Townsend.

I will be back later.

Merry Christmas and thank you for visiting!
RJB