11PM-The snow stopped shortly after my last update with no additional accumulation. It redeveloped about 10PM and we are up to about 1/8th-1/4″ inch additional.Hopefully the snow will continue. It is expected to, and add up to 2-3.

The Pepsi was cracklin cold and delicious. 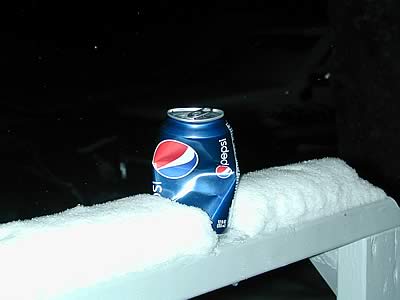 Work kept me out of the shop until late afternoon, but I still got out there and made progress. The #2 was fighting me the whole way, but I am winning. The list is much shorter now, and I expect to ride it tomorrow.

The way that I see it from here, we have what we had last weekend for trails, with minimal additional melting, and now an inch of snow that could go three. The snow mostly fell from about here to Carter, and most of Oconto County saw the heaviest early evening wave. The late news was just on, and the TV said that some areas saw 4-5″ and he kind of gestured toward the central Oconto Co area. Think Lakewood, Mountain, maybe to 64. He wasn’t too clear about it, but I will try to track it down.  Different waves will hit different spots, those are just the ones that I saw today.

Not much has changed otherwise, so this is pretty much the overnight report. I will update with snow totals in the AM. 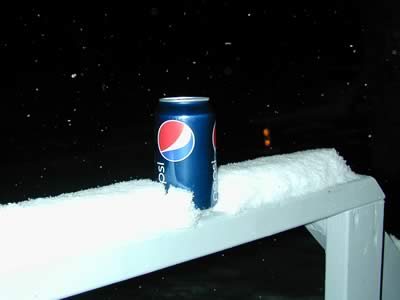 3PM- We had a dusting of snow this morning, but so far that is it. The heat of the day has come and gone, and it peaked briefly at 35. We have a heavy overcast and have all day.

Look what the GFS brought us on the latest run this morning! It is for day 15, but I love what it says!

They also added an inch of accumulation possible from Wednesday’s snow showers on the NWS forecast. Is it my birthday or something? I thought that was in summer..

Monday was a mediocre day for the cause. I saw it get as high as 38 on the car thermometer. The good news is that the sun only peeked out of the clouds a little over the course of the day. We did see some melting, but it was not significant. The easy stuff is gone, now it is the big ice base that the sun is chasing. At that point it should be about what you saw last weekend.

There is snow in the forecast. The NWS is looking for up to an inch today, and an inch or two tonight, with snow showers into Wednesday morning. It is not a big snow event, but I will gladly take any snow that we can get. It still isn’t expected to get sunny until Thursday, then it is forecast to be partly cloudy all weekend (NWS) .

A  check of the latest GFS moments ago actually has a little light snow showing up Saturday and Sunday. That also enters the possibility of a cloudy weekend, and only one or two sunny days this week. It also showed a little bigger snow possible the following weekend, and a bigger storm behind that one. It is a glimmer of hope, but it is still a 2 week out forecast.

Right now my guess is that the trails this coming weekend will look about like they did last weekend, maybe a little better, if we see 1-3. Hopefully the snow gets way out of hand.

We definitely have late season conditions. There are some ugly road shoulders and sunny hillsides here around C in Silver Cliff. As you go north of Brandywine it continues to improve toward 8 and beyond. The feeder trails between Chickadee and Landing 11 and from there to Kosir Lane are pretty ugly, and thankfully short. The above named roads all have nice ditch trails in good shape. They are still reporting good conditions north and west.

The snow looks promising, and if true, it will spruce things up for late week. Otherwise go north young (wo)man.

Thank you guys for your comments on sponsoring a second rider. I will let that stew over the summer. My predisposition now it to try to sell a few sponsorship ads to get him started and let his tip cup fill itself. In theory the bigger range and more comprehensive reports should bring increased donations on it’s own merits. I still have to resist the subscription idea. I would clearly make a lot more money, but I like the idea of free will donations.

This is not a money maker for me, and I am OK with that. I am the richest man in the world because it has brought me together with literally hundreds of really nice people that I now call my friends. You guys generously donate hard earned dollars that defray my riding expenses significantly and make a lot more possible. You bring business to my web site customers and make them happy too. I have good friends that have been visiting with me a very long time, some over a decade. Somehow when I get really down in the dumps, as if on cue, a group of you will walk through the door and make me smile. I don’t know how y’all do it, but it is really priceless. That is how I get paid. The donations help huge, but are not the focus.

I just want to be better at it. This was an unusual year with so much time spent on work this fall and early winter, and my sleds being far less ready than I had thought they were. Ongoing work has cancelled more than a few planned trail days. It left me very happy about having the work, but unhappy about not being better here. I will keep doing my best, hopefully for a very long time to come. I do really like the  comments this year, and am very appreciative to those that offered reports and events.

The prospects for the weekend are good if the forecast comes true. At this point I’d say ride any weekend you can like it might be the last. There is continued snow in the forecast beyond this weekend, but it is just a forecast. The weather hasn’t exactly been swinging our way this winter.

The plan today is to try to get RXL #2 on line. If I have my way the day will start in the blue room and end out on the trails, test riding it as it snows. That apparently sat for a long time, and that explains the nice cosmetic condition. It came at a price of the steering frozen, mouse nests in the airbox, muffler and engine, the engine blown from ingesting mouse nest, and every shaft and bearing on it seized or close to it. That is ok, I didn’t pay much for it, and having gone through the whole sled, I should come away with a good ride.

I almost forgot, I promised someone a link to the giant waterslide stunt. It is pretty nuts.

That is it for the overnight report. I will keep you up to date if anything changes.

Have a good Tuesday and thank you for visiting!