I said I’d update later if anything exciting was happening. Here I am.

The storm kept us waiting all day. I started getting rained on in Crivitz after work, maybe 5:45 or so. I drove home in a medium rain that kept getting more snow into the mix as I went north and west. It was still  a mix and not really accumulating as of 6:30 or so.

I stoked the fire and decided that I’d throw in some extra wood before it got nasty out. Doh! Too late. It was snowing a mix of heavy pellets and goose down flakes. I checked again at 7:30 and golly. It is rockin’ out there! Big flakes coming fast, and plenty of them. The wind is up too. It is probably some tough driving out there. 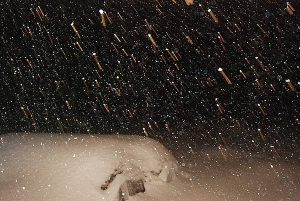 Based on what I saw and how long it has been, I’d say that we were well over an inch an hour, and it is dense snow. It is pretty obvious that we are right on the jagged bloody line between rain and snow, and that is where the really heavy stuff is. It also brings some risk, but right now it looks like all reward.

I can’t say that is the case anywhere but on my back step, and probably to the north and west. I really don’t know where the actual line is. Is it Crivitz? Hwy 64? The radar says that it is about at 64.

Well.. fortunes can change quickly when you are running on the edge. A back step check at 8pm found no snow falling, and a medium rain in its place. There is a little over 2″ down since 6:30 when it started.

The good news is that it won’t be a lot of rain, most of the big first wave is past, and we are getting into the center eye of the storm. Hopefully the cold side of the storm brings more snow. It is expected to.

I’ll be back in the morning. Have a good night and thank you for visiting.