We have another storm coming for tonight through Sunday. There is a mix of snow, rain, and freezing rain expected. Saturday could bring a couple of inches. The heavy precip is expected Saturday night when we could see 8″ with a little more to follow Sunday.

The TV is showing it as mostly snow with 8-12+” expected along with 20-30mph winds. I am inclined to agree with that. The upper air temperatures looked like it would mostly be snow.

The NWS forecast is a little more complicated so I am going to just copy n paste it verbatim.

The storm yesterday brought rain and snow about as expected. What wasn’t expected was how much the snow would stick to trees and branches. It gave them a thick heavy flocking and then the wind blew hard. The end result was a lot of trees and branches down and a lot of people out of power. Right now at 1:30am Thursday there are still 932 power outages affecting 20,571 customers. This morning it was 989 outages affecting 32,716 customers. They are working on it, but there are trees and branches down everywhere and the weather is nasty so it isn’t an easy job.

Facebook photos showed a few trees down on back roads, and some on power lines. I know that I broke a few branches here, and not just dead ones.

Here at C & F in Silver Cliff I have had a few brownouts, including a couple that were pretty significant. I do still have power.

The snow has now frozen in. In some places there are 4″ some places only 2-3″. Under it is an icy base, and on top a pretty good crust. Once the crust was broken it was easily pulverized to make a path, but again it had a bit of an ice base. The truck that I didn’t clear the windshield on the snow is frozen on pretty tight.

We have another storm heading our way for the weekend. Usually I don’t have much confidence in the models right after a big storm but they have been consistent with the weekend weather both before and after the storm so I believe a little more than usual.

Anyway what I see this morning is a slow moving storm, slightly weaker than the last one, moving along the same path. The expected precip amounts are about the same with the GFS model looking at 1.5-2″ of rainfall equivalent and the NAM model showing 0.75-1.0″. We will also be doing the rain/snow line dance with rain or freezing rain some times and snow others. It is going to be a close one.

It looks like the storm will start Friday night about midnight and continue until Sunday afternoon or evening. The heaviest of it looks like it will come Saturday night.

I would really like to see some more frost in the ground and ice on the lakes before we start building an snow and ice base, but I don’t get to write the script. We are on the path to build a nice little starter base on roads and trails. With the winter solstice 24 days away and the sun mostly well hidden behind storm clouds the sun is not a big factor. Temperatures next week look like they will stay in the low 30s so we should keep what snow and ice that we get.

A word about snow totals.. I was right on the rain/snow line for a lot of the storm. Places north and west saw more snow than I did here. It tapered down to a couple of inches near Crivitz and not much east of 141. In a storm like this Lakewood, Goodman, Dunbar, Townsend, Carter and Wabeno all get more snow than I do. I haven’t figured out if it is an elevation thing, or if it is just a little colder there.

Over the years I have identified places that the rain/snow line will set up. Coming out of Crivitz on A sometimes it is right at Hwy X, and again at A & C heading west on C. Heading north on Parkway Rd Benson Lake Road is a big one. They always have more snow there than here on a close storm. Heading toward Lakewood on Hwy F there is distinctively more snow west of McCaslin Mountain. Close to home my friends over toward Old J and Harper Rd frequently get a couple of extra inches more than I have here.

The point is especially on a storm with a close rain/snow line consider my snow totals and photos very local. Just like I get more snow than Crivitz, the Hwy 8 or Hwy 32 corridor often gets more snow when the storm is a close call.

Don’t forget the buffets at Rapids Resort and Hilltop Resort today, especially if your power is out and a big dinner got cancelled. Both have a nice spread and are very reasonably priced.

Have a good Thanksgiving and thank you for visiting!

It did not snow much more at all. I would guess that I peaked at about 4″. It is a fairly warm day so with settling we are down to about 3.

That beautiful snow sticking to the trees brought a ton of trees and branches down when the wind started blowing. FaceBook friends reported outages all over the area and many are still out of power. As of 2:30pm there are 989 outages affecting  32,716 customers. (Link) I have power near C & F in Silver Cliff. The GF’s house near Thornton’s is still out and WPS said that it might take until tomorrow before it is restored.

There is no bigger fan of the line crews that deal with this than me. Today they have a huge job in front of them in not very nice weather.

Time to go out and work on cleaning up my little Ponderosa. I probably will not plow the driveway but will do the steps and maybe the wood yard. The snowblower will not be happy at all..

10am- light snow, very little accumulation since the soda can picture.

It switched back to rain once the sun came up. The local news said that Oneida Co (Rhinelander) had 9″ so far. That was some extremely heavy packing snow when I cleared a spot for the soda can. It is not going to be easy to move. 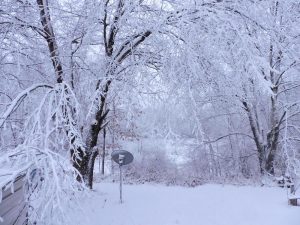 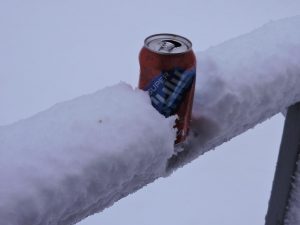 Big goose down flakes are coming hard. About 3″ down. The radar is showing lines of rain with yellow and orange feeding the snow line. We are right on that razor’s edge for the rain/snow line. At least for the moment it is coming as snow. I very much expect that places even a few miles to the north and west will have much higher snow totals. Likewise heading east and south they probably have little or no snow. The forecasters were right about a sharp drop off in snow totals, and they pretty well nailed where the line would be.

I just checked again at 6am and it is really snowing hard. Won’t be long till we hit the 4″ mark. The Hughes Net satellite internet is down. Not sure if it is from the heavy snow or if the dish is snowed over. Probably both. Using the mobile hotspot on my phone to post.

Between the heavy snow falling and strong winds driving it and swirling it, travel on the roads has to be nearly impossible for visibility. Then there is the wet heavy snow on the road. I am happy that I am not driving right now. Even on a snowmobile it would be a tough ride.

It must have turned to rain for at least some of the  last 3 hours. Big goose down flakes are falling but there is less than an inch on the truck.

It is not rain.. It is snowing medium flakes fast and hard. It is being driven at a 45º angle on strong winds. 1/4″ down and coming fast..

In spite of what the radar says, it just started snowing here a few minutes ago. We have big goose down flakes falling at a medium pace and being blown back and forth by the gusty winds. There is only a dusting on the porch rail and truck but that will change fast if the big flakes continue. According to radar the rain/snow line is near Hwy 64 and moving north. Another radar zoom showing higher levels of the atmosphere says that we are right on the edge of that line.

Looking at the radar on the rain side of the line there is a big blob of moisture heading this way, and several more behind it. Will it turn to rain or a mix? Will it snow the big flakes at 2″ an hour?  Things will get interesting over the next few hours.

The winter storm coming tonight is still on track to make a mess in northern WI.

The way that it is shaping up there is a sharp drop in accumulations between Lakewood and Wausaukee. The TV says Lakewood could see a foot while the NWS winter storm warning says that Wausaukee could see 3-5. The NWS forecast for my house near C & F in Silver Cliff is for 5″ tonight and 2″ tomorrow.

Here is a link to the latest winter storm warning.

So far there is one crack in the armor in the forecast models. The NAM model has backed off on the precip amounts from 1-1.5″ to 0.5-1.0″. Other than that the models have been consistent with the storm for the past few runs.

At this point exactly where the rain/snow line sets up will be the determining factor if we see 4″ or 10+ inches. We won’t have a straight answer on that until it is here.

Once it starts snowing I expect travel to be very difficult. The wet snow and rain will pack down on roads and make them icy. Also there is a lot of wind expected with the storm, both during and after. Trying to drive in wind driven snow can be a real challenge. (Note to self.. check the generator over this afternoon).

Remember how I said It is shown reaching 992mb for central pressure, a moderately strong storm. If it had more moisture to work with it could be a good one.

Well here we are. The latest model runs show a lot of moisture coming with the storm. The TV says a general 4-8 across northern WI, with up to 12 possible near the UP. Lakewood is shown at 8.1″

The QPF on this storm shows 1.0-1.5″ of rainfall equivalent on the North American model 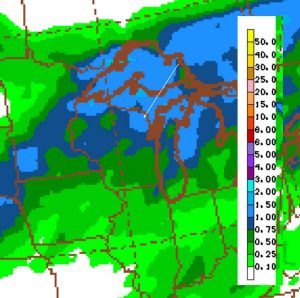 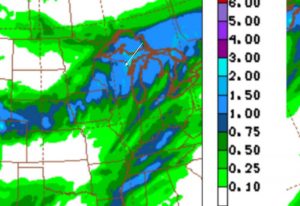 If we go conservative and say that we have 1.0″ of rainfall equivalent, deduct 1/3 for rain and go at a 10″ per inch of rain we are still looking at 6-7″.That is the low end number.

The timing changed a little too. Now it looks like a Tuesday night Wednesday storm.

I’m going to take it seriously with my snow preparations but I know that it could easily miss us or be a lot less. A lot could change in two days. At the moment everything in front of me says that we are in for a pretty good storm with strong winds and a pretty good dose of snow.

There is another storm on tap for late week that could be another one to watch.