That was quite a storm. There is no question that trails will be open and nice this weekend throughout the region. I have reports that the trails are laying down and packing really nicely.

It is a very heavy packing snow and it is no problem making a snow ball, man, or fort. I measured 15 and 16 inches in the front yard and it was about 17 in the wood yard. Because it is so heavy and with a little rain that came in the afternoon it is very sturdy snow. When I walked out to the wood shed I did not sink in that far and I was probably being held 8″ off of the ground. I was about level with the bottom step.

On the low end of the storm accumulations are areas down by Green Bay and up by Iron Mountain where totals go under 6″. From reports that I got over the course of the evening Marinette saw 10-12, Crivitz 12+, Mountain 13+, Crandon had an official reading of 17″ with unofficial reports of 20-23″. I will put my peak total at 16.

FINALLY I can say that we can ride the trails throughout the system. There is none of this north & west business (yet), you can ride east and south too. Six to eight of this kind of snow would make a good trail, we had at least 12 just about everywhere from Marinette to Crandon.

Plowing the snow was a nightmare. I would get about ten feet and the snow was piled higher than the blade. It didn’t roll off of the side of the plow well at all. The ice base made pushing the giant piles very hard as did the snow itself. There was so much and it was so heavy that it was a lot for the truck to take on.

I got stuck too many times to count. Being that packy and wet I would sink into wheel ruts if I stopped, and snow blobs topping the plow was common. The ice base didn’t help especially with some water on it. I gave up after a while and will come back at it for a cleanup tomorrow. The snow bonded to the base a little more late in the day and was a lot more plowable, but by then it was dark.

The snow was fantastic for snow starved snowmobilers, but it caused a lot of problems. There was an accident by Porterfield with one teen dead, and one seriously injured. Tornadoes popped up along the southern parts of the storm where the warm moist air was feeding it. There were 16 reported tornadoes that left 12 dead and damage in MO, KS, KY, IN, and IL.

Ice fishermen that have shanties on the ice are going to be in for a challenge. My neighbor and I recalled a storm like this about 8 years ago, and our adventures recovering shanties. Not only was the wet heavy snow a hindrance, the snow weighed down the ice and there was about a foot of water on top of the ice and in the snow. I would avoid riding lakes for now, or at least be very wary of slushy spots.

There is another storm on tap for Friday and maybe Saturday. It turns into a pretty strong storm as it passes to our east. How far to the east that it goes is the key. Most guidance suggests that it will be a 1-3 or 2-4 storm for us. If it moved west 100- 150 miles we would be looking at 6+.

So we are looking at a big sturdy base, a little fresh stuff for Friday, and great conditions. That means that the weekend will have a high of  minus 70 and wind chills 9 degrees above absolute zero, right? Not quite. The weekend forecast is for cloudy skies with a chance of some snow showers, and highs in the upper 20s and low 30s. Very nice..

Over the next two weeks I am seeing three major warm spells. Next week about mid-week we could see upper 40s or worse. I fully expect that this snow will last two weekends, but it is March in an hour and a half, so don’t wait too long.

Well it has been a full day and if there is hope of getting some quality saddle time tomorrow I had better rest up. Have a good night and thank you for visiting! 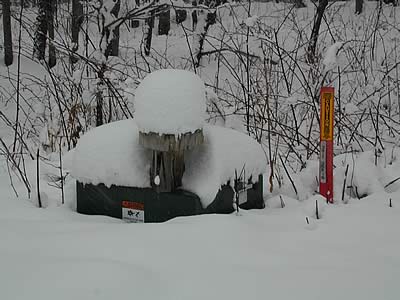 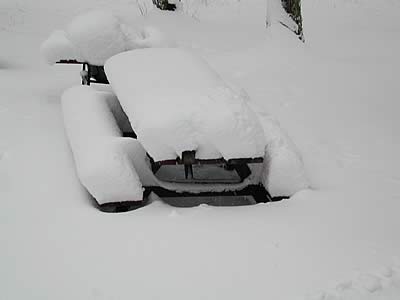 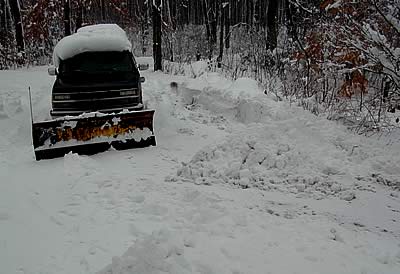 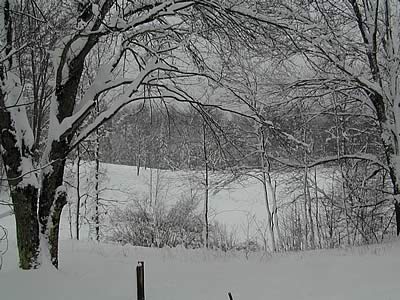 Wow there is a lot of snow out there. In the side yard and wood yard it is up to my knees, call it 16-17 inches. It is definitely wet and heavy snow ball or snowman making snow.

This might be a great thing for snowmobiling and catching one good weekend, but there are a lot of people that aren’t too happy right now.

The snow is very wet and heavy, and as of about noon it is a light rain/sleet mix. Any spin of the tire immediately turns the base to ice, making plowing next to impossible without tire chains, and travel very challenging even for a 4×4 truck.

It took about 2 hours of digging and spinning to get the truck unstuck, and every time that I got it moving it would get buried again. A friend that snow plows had about 7 missed calls on my phone when I woke up, apparently he keeps getting stuck, and wants to bring a second truck to plowing jobs. I’d love to help, but I was buried up to my bumpers.

The power has been out since late morning, and I am under Honda power as I type this. No kidding, I no sooner wrote that and it came back on. We will see if it lasts. Tree branches really loaded up with the wet snow, and it wouldn’t surprise me to see some more outages.

In comments Lynn asked exactly where I am. I am located about 30 miles NW of Crivitz near Kosir’s rafting and the junction of Hwy C & F in Silver Cliff. If you look at a map of Marinette Co, the western border looks like steps. I am on the northeastern corner of the top step.

Gary is looking forward to getting the jeep out for plowing and bombing around. I told him to bring tire chains. Between the deep heavy snow and the snow turning to ice as soon as a tire spins, I am wishing that I had bought the tire chains that I scoffed at last week. Even heavy equipment like a Bobcat or front end loader would have trouble without them.

I got word from Iron Snowshoe that they have opened trails and that they will be out grooming today.  Between digging open gates, getting stuck on the icy base, and just powering through 16+ inches of wet heavy snow that might take a while.

I also got word that the Marinette Co Sheriff recommended not traveling today unless you really have to.

Ryan and Selena hit the tip cup this morning and sent thanks for all of the updates. That is greatly appreciated. I am going to be burning some gas this week so it is very timely.

As far as riding this weekend it is two thumbs up. There is a lot of snow, and this will be the first weekend where you can actually ride system-wide without hitting gates or bad spots. People with driveways to dig out will be well challenged, and again, once it is plowed it will still be wicked slippery.

Well I am going to go and pounce on a shower and some food while the power is still on, and then it is back to digging out. Eventually I will get over to the sled, which will take more digging. There is no way that it will jump from a sheet of ice onto a pile of 16-18″ wet heavy snow without a running start, and then there is the 3′ plow bank to deal with.

Just spent a few hours working on plowing the driveway. The snow is heavy and there is so much of it that it is very hard to manage. With a ice base under it it was a real challenge for my 1/2 ton truck. I finally buried it up by the house with a full blade with snow coming over the top as I went into a depression with an ice base and 14-16″ of snow on the ground. Between the snow on both sides of the blade and the ice, I was done. I will dig it out later. For now I am going to get some ZZZs, I was up all night on storm watch.

I measured the snow around the front yard and came up with the 14-16″ number, and it is still snowing.

My official count right now is 12″, with some drift areas deeper. 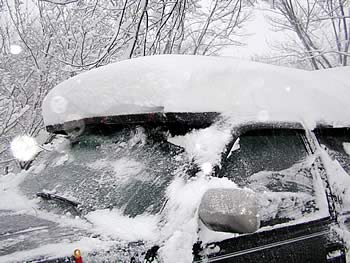 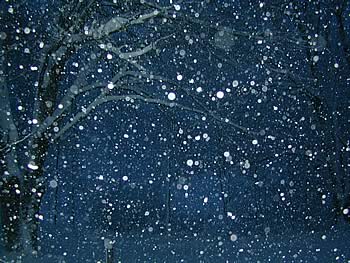 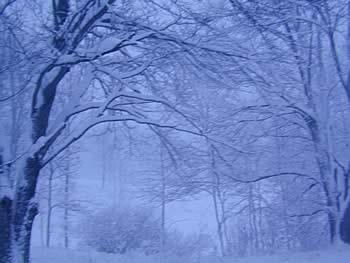 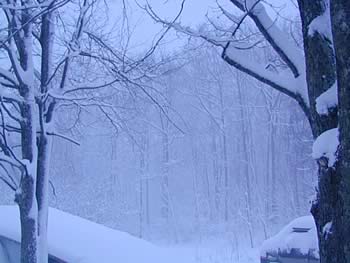 There was some bigger flake heavy snow since the 3:30 update, probably about 2.5-3 more inches. We have to be in the one foot neighborhood or close to it.

The heavy snow is sticking to tree branches and sagging them down. The power has flickered a few times, and the last one was off for a second or two.

The bulk of the real heavy stuff is starting to get past us, but there is still plenty of snow behind it on the radar.

I went outside and did a few measurements within about 30′ of the front door. The measurements came back at 8-9″. There is a lot of snow down.

The snow that is falling is doing so at a decent clip, but it is getting a little sleety. The second wave of the storm is here, the one where we would be sweating the rain/snow line. So far the radar is only showing the pink getting as far north as 64 in central Oconto Co, but farther west the line is as far north as Rhinelander.

I am considering getting up to go out and plow. The 8-9 will be hard enough to handle without a bunch of wet stuff on top.

I went to reset the floodlight out front so that I could watch it snow out of the window. I was pleasantly surprised when I opened the door. The snow is now big flakes coming fast, and there is an inch of new stuff on my railing. Nice.

I just went out and measured a few spots in the front yard. I would call it a solid 3″ since sunset and 5″ total on the ground from today. Those measurements are right up by the house and on the conservative side. There is probably a little more in some places.

It is snowing  at a decent clip and the radar shows a lot more to come. It is not the big wet heavy goose feather flakes or real powdery, it is a medium size and of good quality for our trails.

This is getting good.