There is not too much to report today. I took a few trail pix on my way to and from work and got the first snowmobiler pictures of the season.

People are out riding. I saw several groups of snowmobilers on the trails around Silver Cliff today.

One group was asking what clubs are open east and south. Iron Snowshoe is open as are the Athelstane and Ranger City Riders trails near Wausaukee. River Road Riders and clubs to the south are not. North and west of Iron Snowshoe trails are open.

A heads up.. the ice in driveways and parking lots is wicked. After a little minor sun melting the ice is nice and round and very slippery. I saw one rider do an unintentional 360, and I did several class 3 maneuvers in the car that I wasn’t planning in my super icy driveway.

I expect that the trails will be icy in spots too.

Here are a couple of pictures. 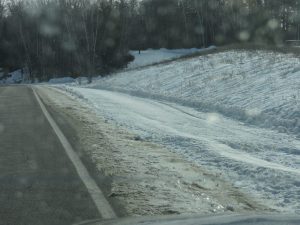 One trail pic is from right by Jungle Jim’s and the other right by Rapids Resort.

I will be working my regular job this Saturday and will not be at Rapids. I will be there Sunday afternoon. We will do it in the future on Saturday afternoons.

We have some light snow showers moving in from the northwest on the radar. It is not expected to add up to much, but it’s snow.

Over the weekend we could see more snow showers, but his time off of Lake Michigan lake effect snow. We will have a storm to our south and a high pressure area to our north setting up an oil pump arrangement with a cold east wind off of the lake. Will it be winter wonderland flurries or a couple of inches? I don’t know.

Temperatures look comfortable for the weekend with highs in the upper 20s and lows in the teens.

There is not much snow in the forecast for the next week or so. Hopefully we will get a surprise clipper or two.

That is it for me tonight. Have a great weekend and thank you for visiting!