I am looking out of the window thinking that it won’t be hard to clean off the car. The 37 degree day already cleaned off most of last night’s snow and ice. The stuff on the ground is faring a little better with the refrigerated base, but it is a little sloppy. It should all freeze in tonight after sunset.

Thursday went well for us. It brought a lot of clouds and minimal melting. The crusty snow/ice from earlier in the week bonded to the bare surfaces and gave us a thin layer. Here is a pic from my driveway from Thursday afternoon. The area up to the first little rise was all bare early week and I was sinking into about an inch of mud. 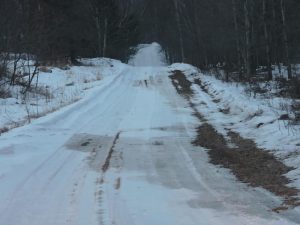 You can see that it week covered and bonded, and there was only a little melting Thursday. Normally at this time of year the sun would have eaten that whole stretch bare on a sunny day.

Yesterday I again went to Lakewood. As usual it was right at sunset but I managed a couple of pictures. This is from before last night’s snow/ice.

This pic is of the trail a little west of Waubee Lodge where it comes out to Hwy F. Most of the base is intact. 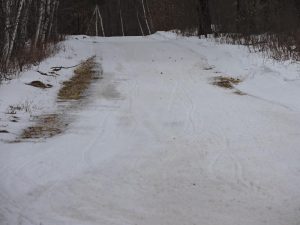 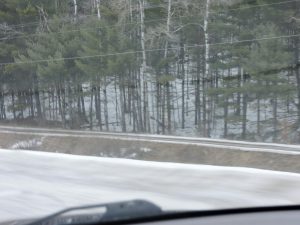 This is a picture of the railroad grade/NST just north of Lakewood where the sunny spot just south of the bridge over McCaslin Brook gets bare. It was. Most of the rest of the trail that was visible along 32 had at least some snow cover and it was better than I expected. Again it was taken before last night’s snow & rain. Not bad for a 50mph one hand shot..

I talked to a couple of riders in the past day. They found a real mix of trails.

The trails in Athelstane were reported to be good, and likewise there was good riding up by Hwy 8. The one rider had a lot to say about Iron Snowshoe grooming too deep and mixing rocks and sand into the north trail, and it melted down faster being stained. There were long dirt stretches and he wasn’t happy.

From what I can tell we didn’t go too far backwards this week and we only went a little forward. What you rode last weekend is still there with a little new snow and ice. There are good and bad spots, but a lot of people found good enough conditions, especially north and west.

My thought is that I am about to get a lot less fussy about what I ride. Next week looks like it will be at or above 40 most of the week, including a sunny day or two.

The wildcard in all of this is the Saturday night/Sunday storm. The TV is the most optimistic with snow coming in about 8pm Saturday, staying snow, and totals in the 5″ range by 7am Sunday. The NWS has us for a mix and about 3″ by Sunday morning. My guidance suggests that the TV is a little generous with the snow and the NWS is closer. The way that the storm is projected to track we would be on the warm side, and 3″ would be better than I expect, but the overnight timing might help us.

At this time of the year every weekend could be the last one. Next week doesn’t look good with too many 40+ degree days, but there is a big storm possible for Thursday.

I am expecting to be at Rapids Resort again Saturday from noon till about 5. Stop in and get a picture of your group and maybe try some of that delicious prime rib.

I held up my overnight report waiting for storm results. It snowed about 1/4″ then it rained, then we had another 1/4″ or so of snow. It made a layer of ice with some snow on top. It will be good for our cause. Not as good as 4″ of snow would have been, but it will help a lot on bad spots.

I will have a more complete update later this morning.