The storm is progressing on schedule. It has intensified and is now bringing severe weather to southern MN. About the southern half of Minnesota is under a blizzard warning.

The latest models that I have are right on track with what has been showing up the past few days. A lot of the state should see 9-12, and the center of the state like Wausau and Eagle River could see 15″. The QPF graphic in my last update actually supported totals of 16-18 or more. The 1.25-1.5″ of rainfall equivalent translates to 16-18 at 12″ of snow per inch of rain. With a puffier snow on the back half of the storm going 16:1 or higher, it would be reasonable to add a few inches. Also adding to totals, the storm will feature winds off of Lake Michigan, and we are expecting some lake effect enhancement. Someone was just asking about that the other night and here it is.

It does look like a heck of a storm, and tomorrow night with plentiful snow and high winds could get out of hand. I don’t question the forecast of a foot or more of snow. It happens. I would like to respectfully submit that most storms with forecasts in the 12-20″ range don’t end up on the higher end.  Some do, but not nearly as many as are forecast.

The dynamics of this storm are very impressive. There is a significant temperature difference in a short span and that will serve to make the storm a strong one. The earlier news showed International Falls at +8 and St Lois, 800 miles away at +54. There are low pressure areas over Texas and Colorado that will help pump the moisture and warm air up from the Gulf of Mexico, and there is some very cold air coming in behind the storm. The ingredients are all there for a good one. The GFS is showing it intensifying to a central pressure of 980 later Sunday as it moves toward New England.

Right now I am mostly concerned about tomorrow night and into Sunday. As we get into the northwest quadrant of the storm tomorrow night the winds are expected to pick up. The NWS has us for 4-8 Saturday and  4-7″ of snow Saturday night, with winds in the 20-30mph range. Sunday it doesn’t snow as much, but the winds will gust to 40 further blowing and drifting the snow. The NWS is looking for 10-16 total. The winter storm warning includes the wording, “..near blizzard conditions Saturday night and Sunday”.

I am expecting a little snow with the sunrise, but things will take a while to pick up tomorrow. There is snow on the radar here and there, but the bigger snow is still back in MN and SW WI.

I am sure that I will be back tomorrow.

The models have run again, and they are again consistent with us getting spanked by a big dose of snow. If things play out as shown we will see near blizzard conditions or cross the line into the real thing Saturday night.

The storm is expected to start bringing us snow late tonight and into Saturday morning. Saturday the NWS is looking for 6-10″ of snow, highs in the 25-30 range, and winds at 10-15mph out of the NE.

Things are expected to start getting ugly later Saturday into Saturday night when the snow keeps coming, but temperatures plummet, and the winds pick up. Saturday night they are predicting a low of 10 with more snow and 20-30mph winds (-15 wind chills).

That is when we could see blizzard conditions.

To qualify as a blizzard, you need temps under 20, winds over 35, and enough snow falling or blowing to reduce visibility to 1/4 mile or less for at least 3 hours. Saturday night looks like it might only come up short on winds by about 5mph. As closely packed as the isobars are on the forecast models, we could get very close with the winds or even qualify. The models are showing the storm intensifying enough to bring a 981mb central pressure at one point. That is pretty big stuff.

An interesting feature of the storm is that there is enough cold air being drawn into it that the snow will likely be light and puffy later in the storm. That will play a big role in the blowing and drifting thing.

This is all still a little speculative since the storm is still forming in the plains. The old saw of I don’t believe it until I can roll around in it should apply here. I recall several years where an early season storm would get us all worked up, and when we woke up the next day the storm took a right at the state line, and instead of 6-10 we got zip. That could still happen.

Virtually every bit of my model guidance is consistent with it coming at us in a big way. At 24 hours out, consistency across all of the models for three or four consecutive runs is about as good as it gets for forecasters.

Preparation.. I was not expecting a big storm until later in the month. That really puts me in the running from behind position with sleds and the plow truck. I have an action plan ready to go though.  After a town run for groceries, laundry, and gas, the snow plow will go onto the truck, I will be throwing 4-5 days worth of firewood in, and I will be filling the aux water jugs. The generator will get filled and serviced, and have a 5er of gas next to it. The snowmobiles that are 3 across in the lower driveway will have to move, and the places that I push snow will have to be cleared out. The tarps over the wood shed and work shed will need to be secured, and salt, sand and snow shovels located. That is a tall order considering that the sun sets in 4 hours, so I am about to leap into action.

You will note that snowmobiles only make to list to get moved. One will get moved into the shop, and once the weather turns around, made ready for the first ride of the year. I will likely zip around a little on Sunday just to play in the fresh stuff, but Tuesday or Wednesday looks like the day to play on those. It will be the first day after today without brutal sub-zero wind chills.

The snow yesterday went about as planned. We ended up with a solid 2″ here, and it has decent moisture levels thanks to some freezing drizzle mixed in. The roads were pretty slippery last night, but the county did salt them and with the warm temps the salt is very effective.

Well, my time is up here, now I leap into action and execute my plan. I expect to be back tonight with any forecast updates, and tomorrow with snow reports.

OOOOOO! The NWS just issued the Winter Storm Warning for the northern 2/3 of WI. The TV just showed Antigo getting 11.5 and Iron Mountain getting 11.9. The GFS shows more, and the NAM looks similar. Yowza! 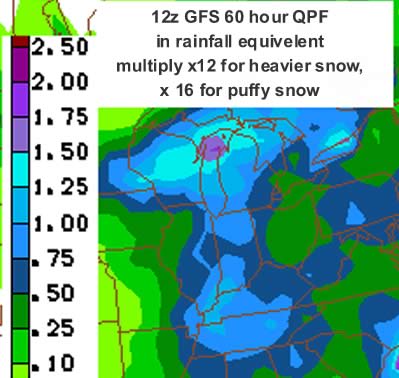