Today I have a lot to be thankful for.  I really do.

First up, I am happy that I have so much work that I can’t keep up. Hopefully that means that December will not bring deep poverty again this year.

I am also thankful for all of my friends here that have been so supportive. I started this 10 years ago December 8th. My goal was to make a little money at it by the third year, or I was off to do other things.. I haven’t made this profitable yet, and there were  lot of really rough winters along the way, but all of the all of the good people that have I met and now call friends kept me going.

I also am thankful that I don’t have a boss to yell at me when I go off topic. It happens sometimes, and here we are again.

Today I am also thankful for the whistleblower at the Hadley CRU, and the bloggers who have kept the story alive.

Because the government run press hasn’t caught onto this ( or more accurately, refuses to report it) folks like me in the alternative media are again doing their job. Considering that they refused to report 100,000+ people in a TEA party marching on DC this fall, it is no surprise that they won’t report this until they can spin out of it and discredit it.

What am I talking about?

The death of global warming. It is over. Ten count, dead. Fin. DOA.

Last week some data from the Hadley CRU in the UK was released. It included many e-mails, data sets, modeling information and all sorts of stuff.

The Hadley CRU is a climate research joint that was one of the top contributors to the IPCC reports that so many warmistas cite. They are one of four or five data sets used to establish the great global warming theory in the IPCC reports.

The Had CRU(T) numbers have frequently been high, and there were all sorts of FOIA requests for their data and methods. They refused to show their work, and only had private peer review by scientists allied in their cause.

So anyway, the information released was incredibly damaging. It not only showed a systematic pattern of fraud and deceit going back 15 years, it showed that there is no global warming.  Some of the more famoous e-mails were talking about how to “Hide the decline” ,  on keeping skeptical studies from peer review and the IPCC reports, and very damaging, the before and after manipulation temperature data sets. It also implicated a lot of famous people in climate research as complicit with their deceitful ways. Jim Hansen’s ears are burning.

There were 160 or 170 megabytes of info supposedly hacked, of which 70 or so MB have been released. They claim that it was the work of a Russian hacker. More likely it was a whistleblower with a pen drive. Another theory is that it was the stuff that was to be deleted before they complied with the FOIA requests.

This didn’t just make the wheels come off of the global warming wagon, it blew the wagon 1,000 feet into the air. This was so damaging to the cause that they are completely stunned. The systematic fraud and deceit stretching back a decade is absolutely crippling.

But wait.. If you buy now, you get not one, but two Ginsu Knives…

Now we no sooner get the blogosphere digesting this, and poof, frosting for the cake. Apparently a big climate study out of New Zealand is under fire for manipulating data to show warming when there was none of statistical significance.  There was man made global warming alright, made up right in the lab. Apparently they pushed early century temps down and late century temps up to establish a positive trend line.

This is as delicious as punkin pie, what else ya got?

There are a couple of guys out of Northern Minnesota called M4GW, Minnesotans for Global Warming. Apparently they have a bit of a sense of humor about the whole thing. A side note, one of the more damaging e-mails spoke of using “Mike’s Nature Trick to hide the decline (in temperatures in the last 10 years). Mike is Michael Mann, the guy behind the now widely discredited hockey stick graph, is widely implicated in the e-mails, and star of the movie. The decline is the trend line in the temperature graphs in the movie.

Here are some links..

What about snowmobiling climate boy?

There is a gun raffle drawing for the Near North Trail Riders at the Northwoods Bar the last Sunday of gun hunting, this Sunday. Those guys always have fun events, the classic good time for a good cause.

December 12th brings an antique snowmobile show with the NEW Low Buck Vintage Riders at the Gateway Bar at the stoplight in Crivitz. 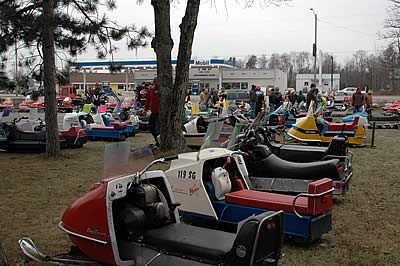 This has grown into a big event, and there is some choice old iron out there. If you are in the area, definitely catch this one.

IN the weather department.. Colder weather is coming. We were supposed to see some snow today, but it looks like the storm is moving away before it changed over.

The 16 day GFS shows colder weather ahead, and a couple of minor chances of snow. There are no big storms in the 16 day outlook other than one just showing up for 12/11 on the very last frame. It is not a big storm, and it might be a little south, but a lot can change in two weeks.

We were making good progress on freezing the lands and waters until the recent warm spell. The Peshtigo River at the north end of the Caldron Falls Flowage was almost frozen all of the way across, and the ground was just starting to freeze. Watch for that to resume now that we will be getting back to more normal temps.

I have been a busy boy inside, so there isn’t much to report from the Blue Room or the sled department.

Well I am going to get back to work. Things will ramp up here in a week or two once I catch up a little and the season gets closer.

Have a good Thanksgiving and thank you for visiting!
RJB