Things finally calmed down a little around here and I can do a proper update.

Last night the snow was falling hot and heavy. One of my favorite things to do is watch the snow fall, and it was rolling along pretty good. I would guess that we are at 4-5″ now.

There was a break in the action for most of the afternoon. There was some freezing drizzle that added a light glaze, but that is about it. It started snowing lightly an hour or so ago, but hasn’t added up to much.

The snow is very wet and heavy. I considered leaving the driveway until the storm was done. I am glad that I didn’t. It had the plow truck grunting a lot for how much snow that there was. This will make a dandy base, and yes there is plenty to ride on, at least at the moment.

My plans to go ride tomorrow may be delayed a little bit. Right at dark there was a little mishap between the back of one of the skis on the RXL and the snow plow. It might be minor, but I am pretty sure that the ski isn’t supposed to stick out 90º from the side of the sled.  I probably have any parts that I need, I am just a little annoyed that I have to wrench before I ride.

I am not sure how the rest of the storm will work out. The rain/snow line has been pretty stubborn about holding around Hwy 64 according to the radar. It seems to be loosing a little ground and moving north on the last few updates. There is still plenty of precip on the way, it is just a question of rain or snow.

The TV said that Minnesota was taking the brunt of the storm. There were places expecting 18-24″ of snow and 60mph winds were possible. That might make Christmas travel a real challange.

That is about it from here for now.

Have a good night and thank you for visiting!

It started snowing lightly again. It looks like the rain snow line is about at 64. There wasn’t much precip over the past few hours with the exception of some freezing drizzle.

Now we are coming into truth time. A bigger push of precip is moving up from the south, and until 64 it looks like rain. We will see..

The snow totaled 4-5″ so far. It is very wet and heavy, it plowed like 12+. Now we have some mist/freezing drizzle.

The radar does not look good. It looks like there is a lot of rain coming this way.

There is about 4″ of wet snow down now. It isn’t doing much at the moment.

Snow. Lots of it falling fast. 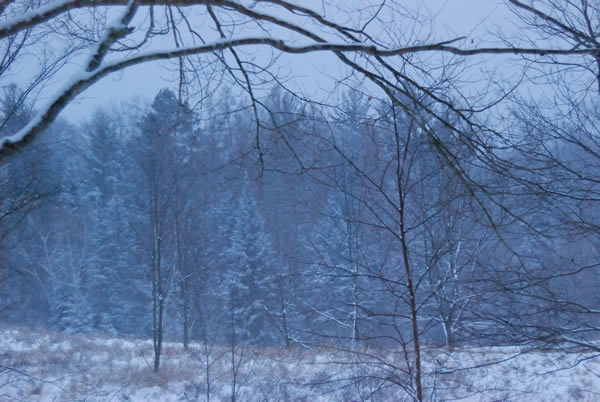