It was good to finally see some snowmobilers hit the trails last weekend. It was not a particularly busy weekend but there were definitely some riders. My theory is that the bitter cold kept the families and some other people home even though they’d love to be riding. I can’t blame them. I don’t like riding when it is bitter cold out either.

People reported that the trails were ok, but not in typical form for February. That is understandable since the groomers only had one pass at them Friday since the snow came Thursday night. I did see Iron Snowshoe out Saturday night.

As far as snow totals I don’t have a solid number because of the strong winds at the end of the storm. I know for sure that I shoveled a solid foot off my house’s steps in western Silver Cliff. The GF’s house near Thornton’s had slightly less. I am sticking to my 9-12″ estimates.

I was not very happy about the bitter cold behind the storm knowing that if it sets up right that it can be a stubborn stretch of weather. Well guess what? It set up just as I feared and it looks like it will be here for a couple of weeks. Looking at the GFS forecast model for the US and for the polar region you would think that the animation got stuck if it weren’t for a couple of storms 14 and 16 days out. For at least the next 10 days it barely changes even a little. It is a very stable pattern so we might as well get used to it. There is a monster storm showing up on day 16, we will see if it is still there when it gets closer.

That cold weather might serve us in the end. Being February the sun is starting to get mean. I can see where the snow on the porch rail is getting settled or evaporated in the sunny area next to the shaded area.

I did not work at Rapids last weekend, though I did stop for a little while between chores to see how many riders were around. I caught a few minutes with these nice folks and they are the first riders pictures of the year on the web site. 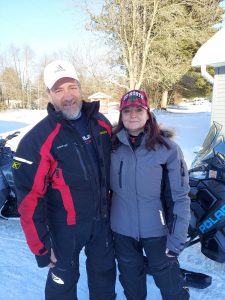 I don’t know what the future holds with me working there on Saturdays to meet riders. They want me to but I am not sure that I am physically up to it any more. It is a good possibility that I might just go there as a civilian on the fun side of the bar and still meet riders and do pictures and occasionally jump in when they get really busy. I am still sorting that all out.

Well, speaking of work, I had better get there before more of the day gets behind me. Have a good week and thank you for visiting!