Wow what a fun weekend! The Rapids was a blast on Saturday. We had a lot of riders pass through and it was just a great time. Thank you to everyone that made it so much fun! I have pictures below of some of the groups that stopped in.

There were a lot of riders out last weekend and they found good trails and reasonable weather. Both Saturday and Sunday were in the low 20s, pretty comfortable riding. 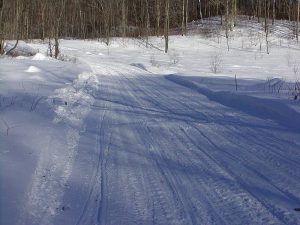 When I went riding Sunday the trails showed that there was a lot of weekend traffic, but the groomer had been through Saturday night. Considering the traffic levels the trails held up pretty well. There was a cement hard base and an inch or two of loose coarse snow on top. There were a few bumps and whoopties, but I found generally good conditions.

As I have shown with roof and picnic table pictures, there is a lot of snow on the ground. There were a few spots along the trail where riders had blown corners or pulled off and found themselves in a couple of feet of powder. On two of them it looked like the rider grabbed the go button and rode it out, one had tracks that suggested that a little digging went on.. There is a lot of snow out there.

The word on the street is that places north and west got more snow than we did. That isn’t really a surprise, it happens when we are right on the rain/snow line.

The sun is becoming an issue now that March is almost here. When I rode Sunday it had only affected a couple of sanded sunny spots on plowed roads on the way to the trail. I looked it up and the sun is 14 degrees higher in the sky today than it was on December 24th. The day is also about an hour and fifteen minutes longer. Get while you can.

Let’s do some pictures..

I really want to thank everyone for a great weekend. It was a blast Saturday at the Rapids, and Sunday’s ride was fun too. Thank you all very much!