The same high pressure that is going to block us off from snow tomorrow and Wednesday has been raising heck down south. I did a little looking around, and they are taking it badly.

Huntsville Alabama reported 7″ of snow on the ground, with some reports of almost 9″. The airport there reported snow as heavy as 4″ per hour at one point, along with thundersnow. Atlanta is pretty much shut down from their 6″+, and places in South Carolina are reporting over 8″.

I couldn’t resist. Here is a Youtube of a guy skiing in downtown Birmingham, Alabama.

We could see an inch or two mid-week when we get leftovers of a storm going to our south. There is also a clipper possible for the weekend with another 1-3.

People have been asking about riding this weekend since some clubs are reporting poor to fair or fair to good trails. There are riding opportunities, but personally I am on stand-by.

Chute Pond trails are in poor to fair condition. I talked to our Groomer Boss yesterday and we are not grooming until we get more snow. I got reports from riders that heading west into Langlade County the trails are in good shape, and Paul Bunyan in Lakewood and Red Arrow Townsend are both grooming and in good shape.

We are still riding out the hangover from the New Year’s storm. Conditions right now are a lot like late March. There are sheltered areas that have good base and even groomed up well. Roads and sunny areas are bare, except for the dusting of snow. Some areas are in between with an ice base and a dusting of snow. Rodger sent in pictures of Townsend yesterday, here is one of them. 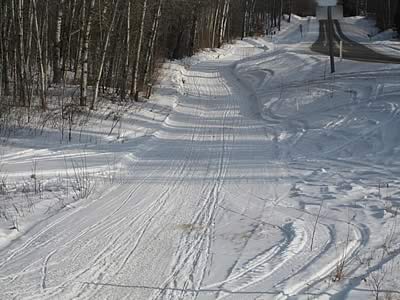 You can certainly ride that, but there isn’t much snow. Apparently the guys that tried were overheating.

He also sent in some nice pics of the Lake effect snow in the UP last weekend. I liked this one.. 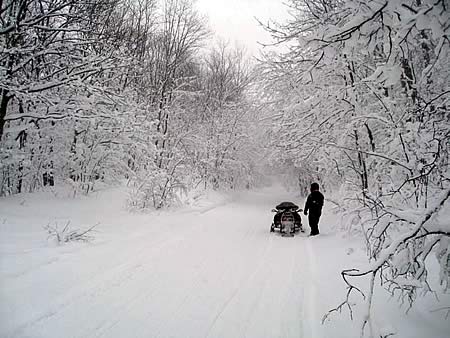 Beyond the lack of free snow, the thing that is keeping me down is the long stretches of bare stuff. I’m looking at a 2 mile ride teetering on snowbanks to get to the trail, and probably overheating on the way there.

Beyond the dusting of snow that is hiding the ugliness so well, the elements have conspired to break down some of the icy glaze on the trails. They are actually a little better with time and grooming. The bottom line is, we still need snow.

I might scout around a little later today, or more likely tomorrow, to see if I can find a place to ride. One of the sleds got finished up yesterday in the shop and I’d like to test it. Most likely I will wait for snow and spend the time working on other sleds.

A couple of inches this week would put us into nice rideable trails in some spots and still a little bare in others. There would be free snow on the trails that survived, and many of those would be nice, but the roads and bare stretches would take more than that to heal.

Right now I’d compare our conditions to those of late March. There is base and even some nice trails. There is plenty of bare stuff in the usual spots too.

Things are expected to get a little better. As we get a little snow up here from the storm tomorrow it will help. It is expected to be as little as light snow or as much as an inch or two. The weekend forecast has a clipper coming through, and that could add 1-3. There is another little one possible next Tuesday.

Beyond that the GFS is offering a lot of different scenarios from run to run. It is possible that we could get back into the storm path in a week or so. That’s the good news. The bad news is that we might be sweating the rain/snow line of some of the subsequent storms. That is hard to call 10 days out, so for now it would just be good to be back in the game.

From Dan G (Thanks Dan!)

Chute Pond Snowmobile Club is participating in the Brent Rosner Memorial Snowmobile Ride January 22, snow or no snow. Brent was a Pulaski High School student who died last June from a bacterial infection. The ride starts in two places simultaneously- in Pulaski and Water’s Edge on Anderson Lake. It will be a Poker Run, both rides ending at Water’s Edge on Anderson Lake. More details on our website http://www.chutepondsnowmobileclub.com . This event will happen snow or no snow.

Starts at 11:00 AM @ Northwoods Bar-Benson Lake Rd & Old A in Athelstane-Food & refreshments

8am – 3pm – Food and refreshments, raffles and prizes for largest fish. Sponsored by the White Potato Lake Sportsmen’s Club

Fundraiser for the Town of Riverview Fire Department. They burn all of the dead Christmas trees in a huge bonfire. the goal this year is 35′ high. You can have your tree picked up for a $25 donation. Starts at dusk.

That is about it for today. Have a good week and thank you for visiting!