We did not see any notable additional accumulation over the course of the day. Right now the back wave of the storm is catching us and so far it was enough to dust the roads white a little, but that is about it.

The snow started as rain and I just talked to a neighbor that said that it was raining pretty good at about 3am. That would explain the 1/4″ or so of ice under the snow. My final count on the snow is 2-3″ with a very solid 2″ of wet heavy snow after it settled over our warm (~35º) day. Both the snow and the ice layer will help our cause, and especially the ice layer. If we have to ride thin trails or roads it is good to have a little ice under it. It is only 2-3″, not the foot that we need, so early season conditions will continue, but it is getting a little better.

The roads were hit and miss. The county roads where they salted were mostly wet with some leftovers frozen onto the road. Salt is very effective at 30+ degrees so the main roads got cleared fairly well. Side roads like Parkway are pretty icy, though the towns did hit them with a salt/sand mix here and there to keep them at least a little sane.

Tonight we could go into the mid-teens for low temperatures. That would go a long way toward freezing in the icy layer on roads and help the wet packing snow freeze hard too.

I mentioned yesterday that we had a CME, coronal mass ejection, and that as the energized particles hit earth we could see some northern lights. Well the storm clouded us over for that one.

We had a pretty big one Sunday night, and it should start hitting tomorrow about 10am and continue into Wednesday. Tomorrow night could well bring northern lights to a lot of the upper Midwest.

Solar flares are classified as C1-9, small ones, M1-9 medium sized ones, and X class that are the really huge ones that can cause planet wide radio blackouts. The scale is also logarithmic, meaning that an M8 is 10x stronger than an M7. Our latest was an M 8.7. That is pretty significant. It also brought the biggest radiation storm in 7 years.

For most of us that just means some bumpy rides on telecommunications here and there, and some northern lights. Ham and CB radio operators get to look forward to some skip, where a signal can take an obtuse bounce off of the ionosphere and really travel a long way. Back in my days I could skip talk to people in the southern US pretty often, and once I actually caught the Virgin Islands. CQDX CQDX The ‘ol Mad Hatter barkin’ it out in the far reaches of Northern WI, come on back watcha got?

Some homework on this topic, google up the 1859 Carrington Event. That one was so strong that they could see northern lights as far south as the Caribbean, and it was starting fires in telegraph offices and shocking operators because so much energy was being gathered by the lines. People in the NE US could read a newspaper at night by the light of the aurora, and some reportedly showed up for work in the middle of the night because the sky was so bright that they thought it was morning. Something like that today would wipe out all telecom and a lot of the power grid and be a national or global disaster. Thankfully it is only a twice in a millennium class event.

A late addition, Dan G commented a little while ago saying that Chute Pond was reporting 4″, and the 100 Miler was reporting 6. Very nice, thanks Dan!

Have a good night and thank you for visitng!

Not much additional snow has fallen.

It is great to have a storm to talk about.  So far I have about 2″ of pretty wet snow down in the front yard. Chris reported about  an inch and some messy roads in Crivitz as of  8am. The snow has continued to gather on tree branches and it is very pretty outside. I haven’t had the chance to wander too far from the house, but that will come later.

Right now the snow has let up and is mostly light and occasional. We are in a dry slot between arms of the storm. Hopefully we catch a piece of the back arm that is hitting eastern MN hard right now before it moves too far north. The back of the storm is always hard to predict, so it is a coin toss if we see a couple of more inches or if this is it.

As usual it turned to snow a little faster west of 32 and north of about the northern Oconto Co line. It looks like northern Langlade Co and over toward Antgio and up into Forest and Oneida Co saw a good taste, and my wild guess is that they have an inch or two more than we do.

The snow is sticking to the trees and everything else. Here was the scene outside of the back window this morning at about 7:45am. 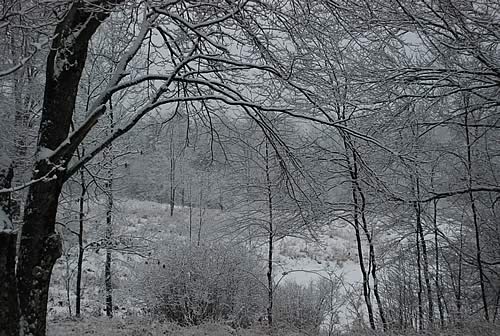 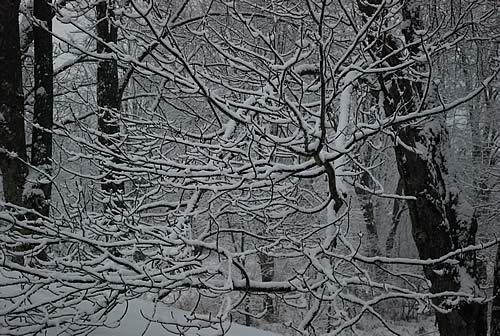 Many of the area schools have closed for today. Crivitz, Coleman, Florence, Wausaukee, Beecher-Dunbar-Pembine, Goodman, Marinette, Menominee, Suring,  Lena, Niagara, Peshtigo, and others are on the news as closing.

The rain and drizzle overnight glazed everything in a thin layer of ice. As of 7am right here in Silver Cliff it has changed over to snow and there is about a half inch down.