Nov 8, 2012
Ed note- I started this update Monday and just finished it overnight Thursday morning. That is the reason for the multiple dates. RJB

I have been taking a little time off from blogging over the past month. It has been a long time since I have taken a hiatus, and I really have a lot of stuff to do before Winter sets in. I have been hammering away at my winter preparation work, but I really have my work cut out for me over the next couple of weeks.

Sunday was wood burner day. I pulled the wood burner apart and cleaned it all out, I pulled the chimney apart and cleaned that, I fixed the ceiling fan that blows around the heat, and the lights out back and in the wood shed. Tuesday I got a wood splitter and split and stacked about a cord of nice oak, probably about the 4th of 7. I still have about 3 cords of firewood to cut, split and stack, but most of it is here in the wood yard.

We have been having a cold and wet stretch for a lot of late October. It started with some nice warm days, but that turned around, and hasn’t come back. A lot of the days recently that would be in the 50s or even 60s were in the low or mid-40s for high temperatures. Overnight low temps in the mid-20s have been common, and a couple of nights got into the upper teens.

There was a little snow that fell mid-state last weekend and a little in the UP and Vilas Co snow belt areas. The radar didn’t show anything that indicated any notable accumulation, but it was blue, indicating snow.

We had a little light snow Tuesday morning, but it did not add up to anything beyond about 1/2″ on cold surfaces, and the warm afternoon took that away promptly.

I was surprised to see a lot of skin ice on the upstream end of Caldron Falls Flowage this past week. Upstream of landing 11 a lot of the slower water has a shell of ice, and the landing had partial coverage too. This was just first ice that a mouse would be unwise to cross, but it seems ahead of usual to have that first ice still in place when I drove by late in the afternoon. Monday when I checked it was about 1/4-1/2″ thick right by shore and gave away easily.

Speaking of flowages, they drew down Townsend Flowage this year something on the order of 6′. Driving by I can see a lot of old trees and obstructions. I have a few pictures below. You will want to be careful riding there this winter when the snow covers up trees and stumps and obstacles that used to be 6′ under water. There are a lot of them.

We had a couple of significant cold fronts over the course of October. Several brought temperature drops of 20-30 degrees. Not only did they come with a lot of rain and sharp contrast in temperatures, the cold behind them lingered for more than a few days.

We also had a wet October. There were several big storms that brought an inch or more, and one brought well over 2″, and probably closer to 3 or 4 in some spots.The USGS rain gauge by Kosir’s shows 3.5″ since Oct 13, and that seems pretty low compared to what I saw. I’d call it 4+ inches, and more in some areas.

Being that time of year, naturally I look at all of this through the lens of what if this were December/January/February?

There were four major storms in Oct that got my attention. Two of them would not have tracked in an ideal path and probably would have been mostly rain. One was a dead bull’s eye, and would have been a foot of good snow or better.

The big one with the 2-4″ of rain would have been a little like last March’s big storm. That definitely would have started as an inch or two of rain. The reinforcing waves later in the storm probably would have been snow and really a lot of it.

The CPC came out with their seasonal prediction a few weeks ago. They ended up with us on the warm and dry side based mostly on a mild El Nino expected. The forecast discussion mentioned that this was one of their tougher forecasts to compile because there wasn’t a clear trend or direction.

The El Nino Southern Oscillation (ENSO) is a big deal for us for winter weather. A strong El Nino can bring warm and dry winters, and La Nina is the cold phase of that. It isn’t as black and white as El Nino means bad, La Nina means good. Last year was a La Nina year and it isn’t news that it was a rough year for trails south of about Hwy 8.

Anyway, we have slightly warmer than baseline conditions in the ENSO region of the Pacific Ocean. To qualify as El Nino conditions temperature anomalies have to be +1ºC of better. Recently they have been in the +0.3-0.9 range, somewhere between neutral and a mild warming.

In early October there was some cooling in the ENSO region, but the past two weeks have brought a slight warming. While it could happen later in the year, there is no indication of a significant El Nino developing.

The models are in pretty good agreement on a neutral or very mild El Nino year. Only the outliers offer up more that a +/- 1ºC departure from the baseline.

The ENSO phase has a lot to do with jet stream position. Having neutral or slightly warm conditions can end well for snow lovers. We are in about the conditions expected, and we are seeing some pretty active weather. There have been some dry stretches too, but we are doing pretty good on precip.

There are a couple of other oscillations that I watch as well. The big one is the PDO, the Pacific Decadal Oscillation. It is like the El Nino Southern Oscillation, but much larger and on a much longer time scale. The PDO has been in the warm phase since about 1982. It bounced around recently, but is going to the cold phase.

This gives me a lot of hope for the long term. The last cold phase or negative PDO was from about 1945-1981.  I am not old enough to remember much about the 50s or 60s. The seventies brought so much snow that it gave birth to the snowmobile industry and everyone that had a stamping plant, fabrication shop, or line of power equipment tried making snowmobiles.  I also recall some huge storms in the early 80s too.

Also in our favor, it has been a strange year in nature. It is no secret to long term readers that I watch stuff like the paper wasps to get a hint of the coming winter. This year I am finding a lot of unusual things that could be interpreted as signals. Based on those I am expecting a winter like we haven’t seen in my 13 years of living here.

The wasps were a real pain this summer as they nested low. There were nests under picnic tables, in the fenders of trucks, and in other unexpected places close to the ground. That turned around late summer, and now I am seeing nests 15′ up. That’s a new one on me.

There are a lot of other things that could be interpreted as pointing to an unusual year. The list includes unusual insect populations, fall colors, unusual weather in March and October, and the way that the coat is coming in on my old cat so heavy.  Sure it is a lot of conjecture, but it seems to be going my way so I’ll entertain it..

I mentioned that Townsend Flowage was drawn down and would be for this winter. Here are a few pictures. Note all of the stumps and trees. Also note in the last picture that it is frozen over in that area. 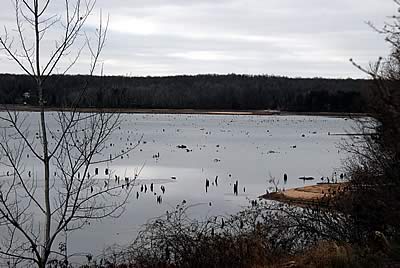 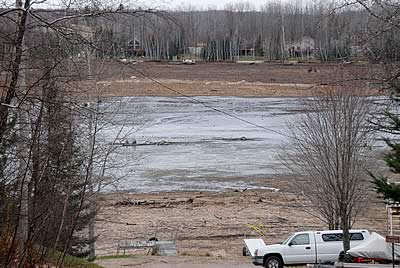 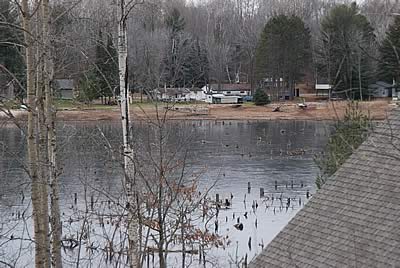 On the way home I couldn’t resist taking my first trail picture of the season. 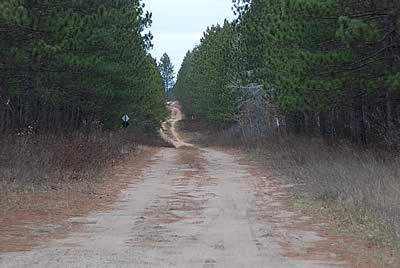 This was the ice on Caldron Falls Flowage at Boat Landing 11 on Monday afternoon. 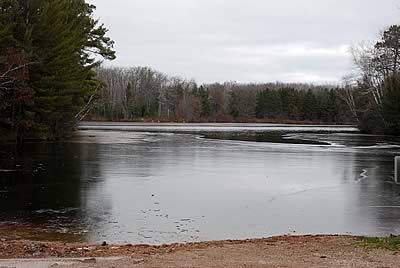 There is a lot more to talk about and I will be visiting with increasing frequency as the season gets closer.  For now, have a good week and thank you for visiting!
RJB