5pm- There was a light mist most of the day. It stayed above freezing. It is 34 now and that was about the same all day. The snow is down to about an inch of heavy slushy stuff.

I tried to snowblow the driveway at 3pm and that was a fool’s errand. I had to keep unclogging the chute and even the rakes. I probably smoked the belt. I would have had an easier time snowblowing 6 bag mix concrete.

It is messy now but when it freezes up it will be a nice ice base.

There is another inch or two possible when the back of the storm comes through but I would not expect much.

People were asking about road conditions. From what I have heard the main roads are pretty good. Salt is very effective in the mid-30s. My side road is icy, slushy and very sloppy. When this freezes up it will likely get very icy. That probably won’t be until Saturday night. The NWS forecast is for a low of 31 tonight and a high of 36 tomorrow.

1:15pm- The storm is a bit of a dud so far. There is no additional snow. The radar shows nothing happening, but when the dog came back in she was a little wet. At that point it is a light mist or very light rain. It is 34 degrees outside so it is a bit sloppy at the moment. When it freezes up it will likely make a nice ice base.

9am- Just about everything in my 8am first look out of the window report was wrong so I nuked it. We have about 1.5-2″ of wet heavy snow. The rain/snow mix made it heavy and it stuck to everything. It is above freezing so it all has not frozen up yet. It is the kind of snow that will make a great snowball but will soak your glove doing it. It is weighing down tree branches a little.

It wiped off of the TV satellite dish easily and that was restored. The sat internet might be a little more challenging being up on the roof. Hopefully that will clear itself as the day progresses. 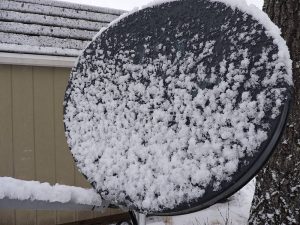 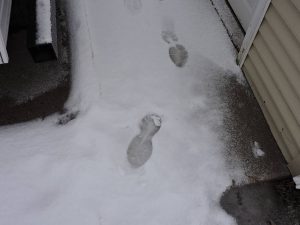 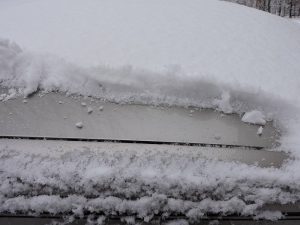 3am- We have rain with just a little snow mixed in. There is no accumulation.

We have a clipper coming for Thursday and Friday that could bring 4-6″ of snow. The models are showing it moving in late Thursday and stalling over us Friday before moving off to the east. The North American model is showing a rainfall equivalent of 0.5-0.75″. At a 10;1 ratio we could see a 4″ plus snowfall. The NWS is looking for some rain and freezing rain, which could bring down totals.

Missing from the latest models is the push of really bitter cold air. It will get colder, but not that bitter sub-zero at night and high of 5 stuff.

I do not have an ice conditions report. There was a press release from the Sheriff’s Dept that a man tragically died when his truck went through on High Falls. It sounded like he slid off  of a small bridge by Pine Acres.

There are radar runs on High Falls this Saturday. The Twin Bridge Ski Team FB page says that they have an 800′ shaved track and a 2000′ wind down lane after it. They start early so get there early in the day.

That is about it for today. I will be keeping you up to date once it snows.

Update- One of our readers contacted me to let me know that the decision to open Oneida Co trails was rescinded after some feedback. (Thank you!) I removed the letter and associated text. RJB

There is still only 2-4″ on the ground and the outlook has not changed much. In the next 10 days the models are showing a fairly strong clipper on about the 15th that will be followed by some colder air. The clipper could bring 3-5 if all goes well. The GFS has been inconsistent after that so I am not giving it much credibility.

Here are some events.. 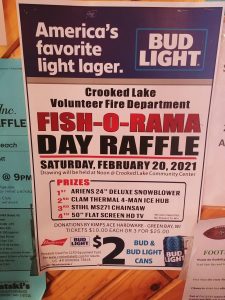 It looks like this weekend is the first of the High Falls radar runs.. 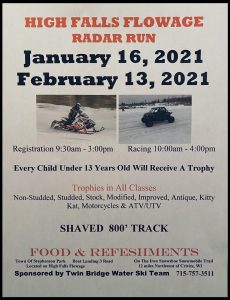 The Red Arrow bonfire by the trail event has been canceled for this weekend. Because of no snow and closed trails there is not access to the site.

Someone reported that my posts are not showing up in chronological order. I tried several browsers and could not reproduce the problem. If you are running into this please use the Contact Me link at the very bottom of the right hand column and let me know what is happening on your end. Thank you for your help.

That is about all that I have for today. Have a good week and thank you for visiting!

We had a pretty nice day Wednesday. It was sunny and we had a high of 39. There was some melting, mostly on treated roads. We only got into the low 30s Thursday.

Tonight the models are showing some interesting stuff. The European is snowing a significant snow for about 1-15. That is showing the possibility of 9-12″. The GFS is not seeing that just yet.

What the GFS is showing for the 15th is a big change in patterns. It is showing a big push of Arctic air that goes so deep into the US that the rain/snow line would literally be in Florida if there were a storm. The Arctic is opening up and a big chill is headed our way. There are reinforcing shots of bitter cold behind it.

The next question is do we believe it. The GFS has been changing a lot in the past few days. I am inclined to believe it if it lasts a couple of more model runs. It isn’t a big shock to get cold weather in January, and especially in a LaNina year. I have kind of been expecting it. I just hope that is snows first.

In the meantime we have a week of pretty nice weather ahead. I am expecting highs around 30 and lows in the upper teens or low 20s.

Right now I have 2-4″ of fairly compact snow in the yard. It might be enough for a ride around the yard but that its about it.

We had frost in the trees again Monday. It was just killing me that I didn’t bring the camera while travelling to and from work. The frost in the trees looked like a Christmas card. It was really something. I tried with the phone camera but it just didn’t comprehend the picture being taken and the pictures came out over sharpened and cartoonish.

The frost in the trees took a day off Tuesday but will likely be back today. We are expecting heavy fog tonight and a low of 21.

I learned something about that frost this week. I would call it a hoary frost but that is not accurate. It is actually rime ice. Hoary frost comes when temperature drops and the moisture on an object crystallizes. Rime ice forms on cold surfaces when fog contacts them and forms crystals. There is a difference. Here is an article about it.

Tuesday the sun finally came out. We saw a high of 38. That helped to clear some treated roads, especially in sunny spots. Less treated or untreated roads did not lose much. With the slight thaw and freezing again tonight it will likely continue the consolidation of that snow from fluffy to packy.

I have about 3-4″ of snow cover and no ice thickness update.

I looked at the forecast models Tuesday morning and was encouraged by a couple of storms about two weeks out. Curses foiled again. They are not on there tonight. There are a couple of clippers late in the 16 day model that could add up to some usable snow. The European model is showing less than an inch of snowfall for the next 10 days.

The weather for the next week or so will be a little above normal with highs in the low 30s and lows in the teens or low 20s. I don’t see any big cold snaps or big thaws.  We are making ice and frost and not losing much during the day.

I did confirm today that the Firelane Bar & Grill outhouse races are on Feb 6th. I will add that to my event page.

I sure wish that I had better news.

Have a good week and thank you for visiting!
RJB