Greetings and welcome!
8:30pm
The snow is pretty well over. I just went out and measured a few spots in the yard. I have a solid 11″ and one spot said 12. Added to the 2-4 from the last storm we have probably about 15″ on the ground. If you haven’t plowed the driveway to your cabin yet you might want to get a guy on that.

There is almost 2″ of snow down since I cleared the driveway at noon. My edge of the driveway measurement was 11″. That seems a little low for what I am seeing so I am going to check more spots when I go out with boots on this time.

The snow plow went by a few minutes ago so it is time to dig out the end of the driveway. Before that the side road that I am on was not plowed.

There are some power outages. The WPS site lists 441 outages affecting 17,159 people. I have friends on Hwy W about 10 miles west of Crivitz that were out. A few phone calls also showed that some areas on Hwy C from Rapids past my house are out as well. That outage is affecting 294 people and the crew is on site.

I don’t think that we made the more dramatic totals of 16-19″ but we are around the one foot mark and probably have more in spots. It is still snowing lightly.

The snow is slowing down at least for now. We have a good bit of it. The side road that I am on near Thornton’s is not plowed. I measured 10+ inches out in the driveway. 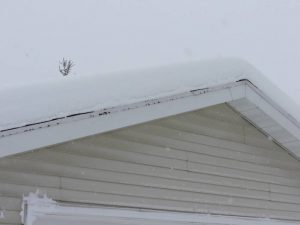 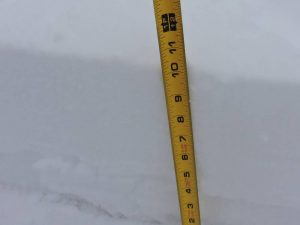 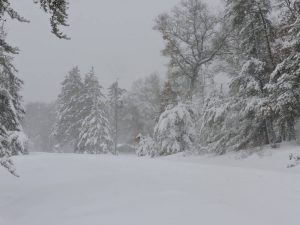 The storm continues to bring snow. When I went out at 10am my measurements were 8.5-9″ of pretty powdery snow. The NWS says we could have daytime totals of 7″. We might not make 19″ but 15 is a pretty good bet.

The trees are heavily flocked with snow but it is a much lighter snow than the last storm. There will probably be some power outages as a result, but so far so good here.

I am going to head outside in a little while to run the snowblower before the snow gets too overwhelming. I will get some pictures.