The storm did not go very well. There were a couple of splotches of pink and blue on the radar, but nothing like snow was evident here on the ground. The TV said that some areas a little north and west of here saw some very minor accumulation of snow with the rain. Athelstane Weather marked 0.71″ of rain yesterday.

It got a little wet and it was warm too. Athelstane Weather also marked a high of 37, and it is 34 as of 1am when I am starting my update. There are heavy fog advisories.

From what I can tell looking out back the places that I cleared with the snow blower are down to the ground. The places that were packed down got icy, and the places with regular snow lost some fluff but gained some bulk in the moisture department.

I know that Iron Snowshoe, Paul Bunyan, and Red Arrow all had groomers out last week packing down snow. Hopefully that paid off big time when the moisture soaked packed snow freezes tomorrow night and turns into a little bit of an ice base.

We have some snow to look forward to this week. Wednesday there is a little wisp of a disturbance that is showing up as a little snow. Call it a chance at an inch or two. That is just the appetizer.

Thursday there is a storm showing up on the GFS that could be the one that we have been waiting for. It is a very powerful storm as shown, with a central pressure of 984mb as it exits our region, and 980mb as it moves NW into Canada. To put that in perspective 980 is the minimum central pressure for a Cat 1 hurricane. Like I said, it is being shown as growing into a powerful storm. 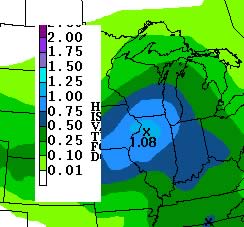 Right now the GFS and the HPC are in pretty good agreement on the path of the storm. It is too far out for the NAM model to show the storm.

As shown it is going about 100-150 miles south of perfect.  We would see 3-6, and from about Green Bay to Sheboygan, 6-9. Milwaukee would be getting close to the rain/snow line, but the QPF suggests 9-12  possible.

Hopefully as this gets a little closer we can resolve the path a little better and more in our favor.

One thing about it being a strong storm is that the powerful circulation will be pulling in some cold air from the north, and there will be a lot more snow than there was with this weekend’s storm. The rain/snow line will be closer to the low pressure area than normal, so this storm could produce a lot of heavy snow.

Item two with a strong storm is that the tightly packed isobars indicate that there will be some wind with the storm and some big cold winds behind it.

That cuts two ways- One with the blowing and drifting, and the other with some lake effect enhancement on the western shore of Lake Michigan. That has landed in our favor before on near miss storms.

At any rate I like the set up that we have. If the rain soaked into the base the way that I think it did, that will work out well when it freezes hard. The shots at  snow Wednesday and Thursday sound good too.

Last week was a rough ride for me. I spent the first three days in big pain from my wisdom teeth and the last three in a fog bouncing back from the surgery. Saturday’s trip to the Bear Point Christmas party got sidelined by truck issues and a few other things that came up. I wasn’t very happy about any of that.

In spite of that I have a pretty big smile on my face. Yes I like the weather scenario, but that’s only part of it. What has me amped is that I have today and tomorrow off, and some of it will be spent in the blue room working on snowmobiles. Finally..

The new little Indy Trail is in really nice shape. That one will get a drive line and suspension check, a high windshield, carbides, and a registration sticker, and it’s a runner.

RXL 1 should still be in nice shape from last year’s minimal use, but the last ride came back with a few issues. One issue was what seemed like spark dropping out on one cylinder.  Since they all fire at the same time, it is probably a coil, and I have those.

I am looking forward to hooking up the EFI box to the laptop and getting that calibrated. My new interface cable came and it is just a matter of working on it. I can also download the fuel maps from the EFI chips. I have some remapped chips, and I can see what they did. It should be fun.

I also recall a hand warmer issue. That and a general check over should find that one trail ready.

That one will also see how the AGM battery weathered the summer. Usually I get a new battery every year. Will the fancy AGM battery with the 2 year warranty be up to season two?

Speaking of AGM batteries, I got another one on E-Bay tonight for $34. By doing a little cross referencing I found a battery that is much more common as a motorsports battery, and the only difference is that the new one is 5/8″ shorter, a good thing. (A Yuasa YB9a-a crosses in to a YB9-B– page 12.) They are the exact same amp hour and CCA, but about $20 cheaper and much easier to find.

Well, I am off to sleep. I have a big day planned for tomorrowday. Have a good Sunday and thank you for visiting!