It looks like the cold north wind has been bringing some lake effect snow to the UP over the past day or so. The radar shows that snow has been falling from the Keweenaw east. A couple of the squalls have been making it this far south. Some big dark clouds would blow in and you could see the snow falling from them in the distance.

Yesterday on the way home from work I drove through one of them.  At a mile out it looked like smoke or fog. Once I got there it was snowing pretty good for about 2 miles, and it was enough to make the road wet. If a passing flurry was that intense this far away I’d have to guess that the UP is seeing white ground and possibly some accumulation. 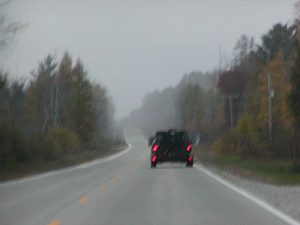 Yesterday morning also brought another first for the season.. the first ice on a puddle. As I was heading out for work in the AM the big puddle in the driveway had ice on it. It wasn’t skinned all of the way across, but rather had the first floating layer of very thin crystals.

Chalk up two more firsts for the upcoming season!