I was driven in from my outside work by one of those big dark clouds that a gusty fall day can bring. This one brought a good downpour, and it also brought our first snowflakes of the year! They were round like hail, but soft and puffy like a snowball. 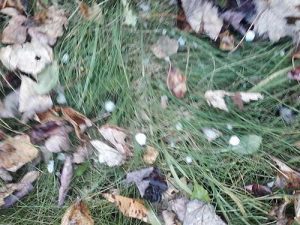 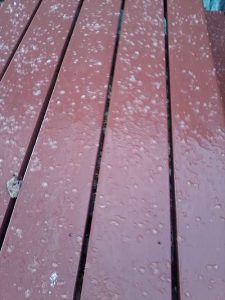 The Big Snow Page is now on a new server. I have high hopes for the new hosting company, and if they work out I will be moving the rest of the server over there. For now we are the test subjects.

Why? Security and malware issues, and performance issues. The old server seemed to have security issues. It took me a couple of days to clean up all of the malware on the BSP account, and I found 3 new malicious scripts this morning.

The new server runs a much more secure operating system and the passwords are very secure. I also have two different malware and hacking monitoring systems running and other safety features that I set up.

As far as performance the new server is carrying less than 10% of the old one for web sites and seems fast on the back end.  Once we get settled in I will set it all up on CloudFlare for added security and performance.

I am getting a late start this morning as I again work on moving the site to a new server. I don’t think that I like what I am seeing for load times as I do the transfer, so it may well be that the search will go on. We will see once it is all in place.

The mission was to have a server with cloud storage and solid state drives to keep load times fast and downtime to just about nil.

Anyway We have some news today and an event.

The big news is that the first snowflakes of the season is expected tonight. We have a series of cold fronts coming through this week, and it looks like tonight’s episode could bring some snow showers. The forecast showed them mostly in the UP and around Vilas Co, but some could sneak into Forest, Oconto, and Marinette Co. I will be watching.

Item two is that there is an event this weekend. The Red Arrow Club is having a Booyah at the Old Town Hall restaurant on the south end of Townsend. It looks like there is a meat raffle and trail ride, and volleyball and horseshoes too.

I am in the midst of doing a bunch of fall chores while the weather is still above freezing, and those days are very numbered, so I am off to get to work. I will be back soon.