There is no question that we have enough snow to get started with trails. It was a nice dumping, and it is fairly sturdy stuff. It is a really grand start for the snowmobile season.

I saw that Iron Snowshoe was out earlier in the day along Parkway by X. I would expect that they will be out tonight panning it and filling in the bumps to get ready for the weekend. They have not notified me about the trails being open, but I am very sure that they will be once they get the groomers out and gates open.

I just got home from work at the Curve Inn. Since a lot of the roads weren’t plowed yet it was pretty quiet and I am home early. For the same reason I opted to park the truck and take the new little snow pony to work, the 94 Indy Trail.

The ride to work is about 13-14 miles taking the back roads. Landing 11 and Caldron Falls roads hadn’t been plowed at all, and there was a lot of snow on them. The little sled was well challenged pushing through all of that fairly dense snow and I was on it pretty hard.

There had to be 10-12″ of snow on the road, and more in spots where a tire rut stacked it up. There was a lot of snow. It was shooting through the radius rods jetting snow out on both sides, and once in a while it would shoot over the bumper and blast the hood and rider. Can I get a yeee-ha?

The snow was sticking to the trees and it was extremely pretty out there. Some of the trees are bending over pretty bad and one spot had wires really low to the road. Once the wind kicks up it will probably take down a wire or two, but so far we are doing good. I only saw two small trees down on the way home and the power is still on.

There was one point on the ride home where a big gust of cold wind hit me hard as I came into a corner. It caused an instant whiteout zero visibility moment as it blew a bunch of snow out of the big pines along the road and blasted me.

Riding up my driveway I had to weave between the little birch trees that were so loaded with snow that the tops were bent over onto the road. Hopefully the wind leaves some there until morning so that I can get a few pictures. It is pretty nice looking.

Most of  southern WI remains under a blizzard warning. A lot of the rest of us are under a winter storm warning. Bill commented that,

My brother from Madison reported 12.8 as of noon and some drifting. There are a lot of areas of the state that got really pounded, and some that expected to be that didn’t get over 6″. We could see 20″ totals downstate.

When I measured at 8:30 I had at least 9″, most readings were ten or eleven. It was a lot of fine snow and some bigger flakes later. It squeaks when you walk on it, and is clumpy to snowplow. When compressed it ices up. It was a good first snow for the trails. 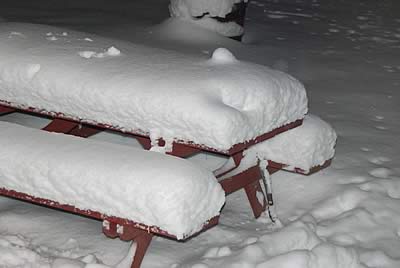 STAY OFF OF THE ICE

We have had a fairly warm Fall and the ice is not up to where it usually is at this time of year. These pictures were on Caldron Falls Flowage on Tuesday. It is not ready. 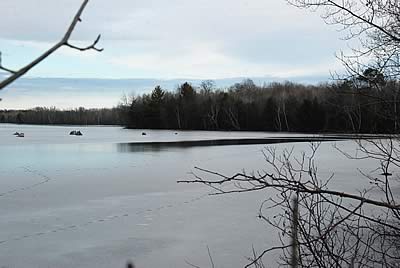 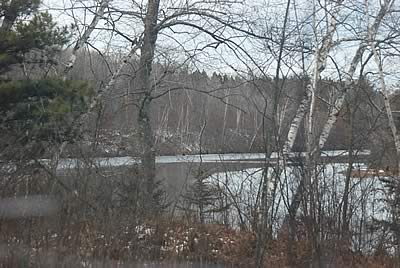 A reminder- Townsend Flowage is drawn down about 6′ this winter. There are a lot of sticks, sandbars, and other obstacles.

The radar suggests that the snow is almost over for us, but we are seeing some lake effect snow and it is still snowing. Every time the radar looks like it is clearing up, it fills back in. I’d be surprised if I couldn’t call it an 11 or 12″ snow tomorrow morning.

I haven’t had a chance to look too far into future weather for the holidays. I can tell you that the NWS is looking for temps in the mid to upper 20s over the weekend. Overnight lows will be tricky with a fresh snow pack and clear skies. Right now they are predicting +10 or so, but I will suggest that those cool crisp nights with fresh snow can surprise you and get much colder. Been there, done that.

I will be back tomorrow once  dig out a little and get a look around. Have a good night and thank you for visiting!

The snow has continued to add up. When I measured a few minutes ago it was over 6″ and closing in on 7. 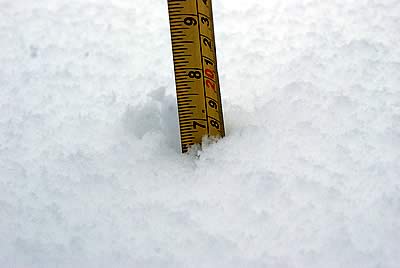 From what I am seeing on radar there is another heavier wave on its way here. I keep expecting the dry slot northwest of Rhinelander to move this way, but so far the storm is winning.

I am very happy that I went out and plowed. It is adding up to enough that two passes, one now and one after it is done snowing, is clearly the right path. It is fairly heavy packing snow.

The roads have been plowed at least once, but they are pretty messy. I am expecting the snowmobile to be the ride of choice tonight, so I am going to go and work on getting all of my gear set up.

NOW I believe. A check of the back step just moments ago found 4-5″. The snow flakes were very fine earlier, now they are getting a little bigger. The snow is a squeeky snow, sounding off when you step in it. There is a little breeze blowing, but it isn’t a driving wind or anything.

The NWS is looking for 6″ today and another 2″ possible for tonight. I have to suggest that we are most of the way to the 6″ now and the radar looks like it might keep snowing for a while.

I am about to go out and do some snow plowing before it turns into a big job.