Wow do we have a lot of snow. The storm really picked up after sunset. Right now my guess for a storm total is somewhere between 9-12″. We definitely made the 9. The radar shows that we will still see light to moderate snow for another hour or hour and a half. I looked outside a minute ago and the snow was going horizontal or at a 45º angle, depending on how strong that the wind was blowing right then. The occasional gust brought a whiteout.

I went to sub for pool league tonight. I am at the GF’s house by Thornton’s and we shot at Rapids. On the way there (7pm) Town of Stephenson had not plowed Parkway Rd at all, and there was probably 5-6″ on it. Silver Cliff had plowed around sunset and there was maybe 2-3″ on the road. The same goes for County C. While I was at Rapids it snowed hard. On the way home I was plowing through 6-8″ on the highway and in Silver Cliff.  The Town of Stephenson was AWOL with their plow crew and I was pounding through an easy 10-12″ of snow. In the meantime the wind had become very gusty and was blowing snow out of the big pines causing a whiteout. It was an adrenaline ride.

I have a 4×4, new Winterforce tires, and a lot of experience driving in deep snow. It was still quite a ride.

I will do some snow measurements tomorrow once it calms down a little. I don’t know if we will ever get a really accurate total with the wind blowing it around so much. We have snow, and a lot of it. As I said probably 9-12.

I stayed sober at pool league because I knew that I was in for a challenging ride home and I was the designated driver. Now I am safe. Cheers and good night.

The snow picked up considerably after sunset. I went out to clear off the car and found 2-3″ on top of the driveway that I snowblowed just over 2 hours ago. We are close to the 5″ mark if not over it. It is nice packy high moisture snow that will make nice trails.

Here are a couple of pictures shot out of the back window at last light. They are a little blurry because of the lack of light, but considering what little light that there was they are amazing. 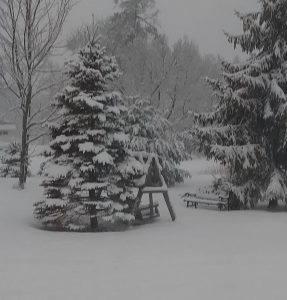 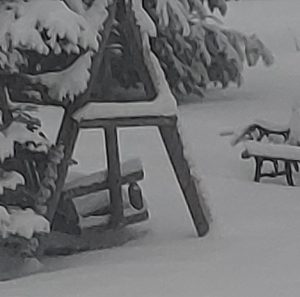 I went out and snowblowed the driveway a little while ago. I would call our snowfall 2.5-3″. There has been a little light rain or drizzle here and there making the snow a little more packy. There are some heavy waves coming and the sky is pretty dark to the west. Hopefully a lot more snow is ahead.

We are under way. We started out this morning with some freezing rain. When I went out at about 11am it was above 32 so it wiped right off of the windshield. It did make roads a little icy. 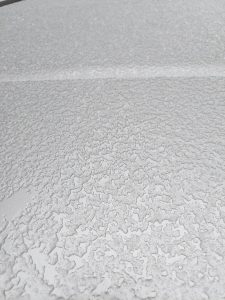 It started snowing lightly a little while later. Those were small flakes at less than an inch an hour. About 10 minutes ago the flakes got much bigger and heavier in intensity. That heavier snow has probably taken us across the 1″ mark. It’s a start.