It was another cold one yesterday.  The thermometer at the bank down the road from work in Wausaukee said +11 for a high, but the sun must have been shining on it or something. It was single digits all day with a wind that kept the flag blowing just about straight out.

The cold has been paying off. Reports from Lake Noquebay and High Falls Flowage have 10″ of ice in the bays and about half of that out in the lakes. With the bitter cold weather I am expecting that my 12″ by the weekend prediction will work out.  That is pretty good for mid-December, and we are making more, day and night.

Yesterday I reported that the Dun-Good trails was open and being groomed, and are in good early season condition. Last night I saw that Iron Snowshoe has opened trails north of Hwy C but is not grooming. Their web site says that they will open gates south of C and start packing trails to make a base Monday. The Paul Paul Bunyan trails in Lakewood will open gates and start packing trails Monday. I also saw that Forest Co will be opening trails Monday.

When I went to Lakewood last night the trails were not groomed yet, and so far there were no tracks, even on the railroad grade. The same goes for the trails between here and Wausaukee.

We don’t have a lot of snow, maybe 4-5″, but there is an ice base under it. You can ride, but more snow would be a lot better. The road trails will benefit from the rain that followed the snow, they have a nice ice layer on them. They are needing some snow to be great, but they are in way better than normal shape for this time of year. 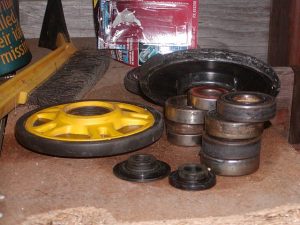 Work in the blue room has screeched to a halt. I am ridiculously far behind on my work out there, but it just isn’t all that appealing to head out there at -9F. It looks like I had better suck it up, the 16 day GFS forecast model has it staying the same or even colder between now and Christmas. I made a run for heater fuel last night and work will resume tonight.

That is pretty much it for this morning. Have a good Thursday and thank you for visiting!