We have a very white world today for the first day of December. Last night a small disturbance came through and dropped about an inch of the white stuff. The storm was expected to stay mostly in the UP, but surprise, it headed south a little and gave us an inch instead of the 0.1″ expected. That is a fine way to kick off December.

The snow has fairly high moisture content, so it made roads pretty slippery. It also stuck to everything, making a pretty winter scene this morning. 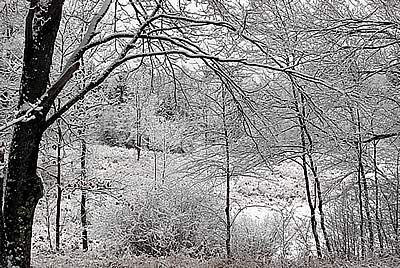 As is normally the case after snow, it is expected to get cold tonight if the cloud cover clears out. We could see lows of 12-17º according to the NWS forecast.

There is more snow in the forecast for the weekend. This one isn’t really a southern storm, it is more like the moisture tap to the Gulf of Mexico for a big storm up in Canada. Because of a lot of cold air behind it, I am expecting mostly snow once the precip gets started.

Right now the GFS is showing it hitting us Saturday afternoon, Saturday night and into Sunday. The QPF on it from the HPC shows about 0.62″ of rainfall equivalent, so I will go with a possible 3-6 for the storm, with the most precip coming Saturday night. This could change, so I will keep an eye on it.

That snow stands a chance of sticking around, the forecast behind the storm is for mid-teens for low temps and upper 20s for daytime highs. Most likely last night’s snow will still be there too.

We have events this weekend! First up it is the antique snowmobile show at Gateway Bar in Crivitz..

N.E.W. Low Buck Vintage Riders 8th Annual
Vintage/Antique Sled Show & Swap
Registration for the show starts 8:00 am, Awards ceremony at 2:30 pm
Trophy classes from 1985 on down in restored and original
Free admission for spectators/Free space for swap/sell
For further info, call Jeff at 715-927-5160

I got an invite on FaceBook that said that the Crivitz Dance Team was having a chili cook off there that day too, with unlimited bowls for $5.

Saturday also brings a brushing day for the Iron Snowshoe Associate Memebership. Call Scott Martell @ 920-655-1780 to see where to meet. In the event that they don’t finish this weekend, they will be back Saturday the 10th. Clearing 130 miles of trails is no small job.

Gun deer season this year was above normal for the area. The harvest in Marinette Co was up 44% with bucks up 21%. Oconto Co saw numbers up 19% including 10% more bucks. Forest Co saw a 69% increase, including 27% more bucks. You can see the early numbers here. (PDF)

When I was in Lakewood and Townsend yesterday it looked like the ice on Waubee Lake and the Townsend Flowage was down a little from the warm days. That won’t take long to change if we start seeing temperatures in the low to mid-teens at night.

That’s news for today. I will be back tomorrow with an update on the Saturday snow and anything else that comes up. Have a good Thursday and thank you for visiting!