Yesterday was one of those days where all I got to do with my snowmobile was walk past it. I did get a look at Wausaukee and Crivitz by truck though. Those areas need more snow.  The trail along C between Athelstane and Wausaukee was thin and the gates were closed with a big Trail Closed sign. Crivitz has a couple of trails open, but they are on the thin side. Chris measured 6-7 from the storm there while I was measuring 9-11 out here.

A lot of the big fields were wind swept and didn’t hold much snow. We must have escaped that by not having the big open areas for those 45+ mph winds to get going.

My plan for yesterday was to try to head north and see what the trails between here and Hwy 8 were about. While my day didn’t go well, Packerland Rider rode those trails and more, and checked in with a report in the comments. (TYVM!)

My dad and I trailered up to Pembine to see if we could find some ride able trails. Well, we were able to put on 130 miles and for the most part they were very bearable. We rode from Pembine to Dunbar via the north County O trail, and then over to Armstrong Creek to top off with gas and try and find lunch. Every wide and flat forest road was in good condition, with maybe just some snirt or wheel tracks as the main blemishes. The ditch trail west of Goodman was probably the best we’ve ever ridden it, mainly because we were practically breaking trail. However, any tight and twisty trail was in need of more snow to fill in the holes and cover the rocks. From Armstrong Creek we rode south to Benson Lake Road, or now known as Corridor 16. It has been a few years since I have been on this trail, but there seems to be more plowed roads than normal, and the parts of trail that weren’t on roads were very thin. The irony of not having ridden this area for a few years is that in the past Benson Lake Road had been designated as an unfunded, dotted line on the map, road route. Now, it is considered a “state corridor.” Unless something changes in plowing techniques, that “state corridor” will be very ugly late in the season under a March sun.

From Benson Lake Road, we connected with the power line trail (Marinette Co. Int 144) for a mile or so south, before heading east towards State Corridor 5 and Int 141. Once we reached State Corridor 5, we headed north back to Dunbar. Once off of Benson Lake Road, the entire ride back to Dunbar was very nice as much of this route is on wide, summer-groomed, forest roads. From there, we took the south County O trail back to Pembine, which seemed rougher than the north trail we had taken in the morning.

As been said by others, the main problem is lack of snow. For the most part, the clubs have done a good job with what they have, but no matter what type of trail it is thin regardless. Thankfully there was no traffic (only met 11 sleds all day), because the trails will not hold up to any type of holiday/weekend traffic.

The weather outlook doesn’t hold a lot of hope for significant snow. There is a chance of light snow Friday night into Saturday and again next Wednesday that looks pretty minimal. Think 1-3 if it goes well. There is another chance the following Friday or so that might be a little stronger, but still not a big storm.

The Fall was not a good one for making ice or putting frost into the ground. When I plowed the snow last week. I was turning up a little sod. The recent cold nights have helped. Nonetheless MJL reported in a comment that the Near North (Athelstane) groomer had broken through and got into some swamp..

Rode 90 miles today from Dunbar south to the flow ages and back north. 16 south out of Dunbar was good a little shirty. The flowages are getting thin and rocky. WARNING the Near North groomer broke thru a swamp on the trail into Athelstane .The back half along with the drag hitch were in deep in mud. It’s dozer time. Trail 5n back north was a lot of fun and was the best stretch of the day.

Again, thank you for the report!

There were two spots in the tornado damage zone where the groomer had broken through, but they had frozen up by Tuesday when I went past.

These guys had a bad day on the ice the other day. While they said that the ice was as much as 5″ right along shore, it wasn’t thick everywhere. They got it fished out, but it took a lot of effort. You are going to want to stay off of the lakes for a while until they freeze up. 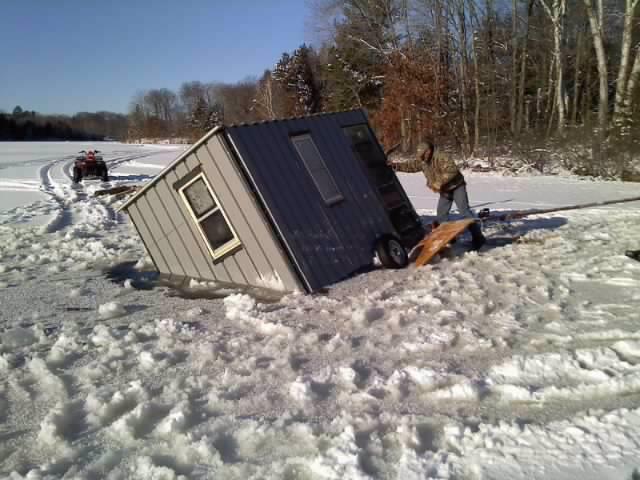 I think that the bottom line on the rails is well described as early season conditions. You can ride and find great spots, but there will be some less than ideal trail too. Forest roads are nice, plowed roads aren’t. Tight trails and those with rocks, ruts, and terrain features will be a little rugged. Watch for rocks in the trail that the groomer kicked up. There will be thin and snirty areas, and I saw a lot of leaves.

On the other side of the coin the base is pretty solid for what it is. Most of my ride was pretty good for a first ride. The good areas are very nice. Forest roads bring stuff like this.

I thought that the groomers did a very nice job with what they had to work with.

Have a good Thursday and thank you for visiting!