Yesterday was pretty typical in that it brought a stuff to do list about three days long. A little irate on how that has been working out lately with the snowmobile the goal at the end of the way too long list, I turned the list upside down and went for it.

The last few things on the list were to check over the snowmobiles and test run the RXL a little more in advance of the vintage ride this weekend, getting some trail time in. I started with the RXL.

The RXL has had a low end bog all season. Early in my tinkering I established that the recoil side cylinder was weak when it tested 10 lbs lower than the others on the compression test. It still read 120, so I figured I could get a few more miles in before a replacement. I was right on both counts.

I was working on the clutch set up and was ready to try it. It started instantly, had great pull high and low, and was running like a million bucks. Yeeha! Let’s hit the trail for a long one. They always run the best right before they pop. It made it about 3 miles and down she went with a total of about 50 for the season. I limped it home and started on the Indy Trail.

The Trail checked out pretty good. It is just about ready for slides, but otherwise it passed with a good checkup. I jumped on that one and headed to Lakewood for a quart of oil and a tank of gas.

That all went pretty good. I was 12 miles out when I hit Whooptie Claude, naming ’em as I hit ’em. The trails had a lot more free snow than they did Monday and were a little looser.  That made for a couple more stutters, whoopties, and high banked curves, but it was nothing to complain about at all.

As it was, I was having enough fun that I took the long way toward the ski hill instead of the Wheeler Lake route to Lakewood. That is a very scenic windy hilly trail. Often the big hills make it a rough trail to groom and keep nice, but this time it was really in great shape. I will probably repeat my ride there before the season is over.

I headed into town for oil and gas. The dealer was at the Yamaha show, so no oil. That wasn’t a drama, I had plenty on board and some at home, and I really hadn’t figured out a graceful way to transport a set of slides home on the snowmobile, so I need to go there soon anyway.  I went next door and topped off with gas ($4.24 premium no E).

I headed back the Wheeler Lake route and really appreciated the ice on the road. It is a long way when the road is bare. On the way past I stopped in at Sandtrap for a quick and recommended burger.

Again on the road behind Prospect lodge I was happy about the ice layer on the road. I gave up very little carbide runner yesterday.

-Really full coverage everywhere, and even enough to fill in rocky slopes and frozen mud ruts. Places that are usually rough are nice.

-Ice base on the roads and trails.

-It looked like they got more snow toward Lakewood than here, there was probably 3+ inches in the one tracks picture.

-The weather has been cold since the snow, and it hasn’t really set up yet. At that point the trails were a little loose, especially in corners and where you give ‘er coming out of corners.

– I wasn’t the first one behind the groomer? I don’t think that I could take points off for that. I had a great ride.

I probably had 65-70 miles in if you count the 6 on the RXL. I saw 11 deer in 4 groups, 10 other riders, and one big turkey that seemed a little territorial about the trail. On the way home an eagle jumped out of a tree along the flowage as I went past and flew right over me. I wasn’t going very fast anyway, so I let off and watched him fly ahead of me for a little ways. It was a good way to finish off a fun day on the trail. 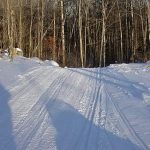 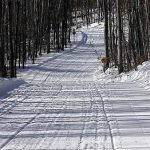 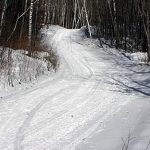 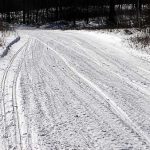 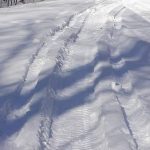 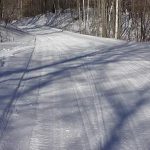 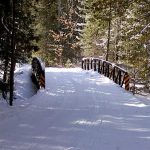 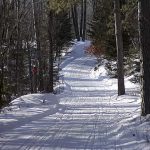 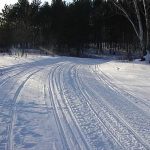 The outlook for the Thursday night/Friday snow has changed only a little. We still have a weakening storm out of the south coming, and it should be a snow producer. Right now the NWS forecast discussion is talking about the potential for 3-6.

The models are slowing the timing of the storm a little and it looks like it could snow lightly into Saturday morning or even afternoon.

The storm looks like a pretty good one a state to our southwest with winter storm warnings and the whole 27 feet. As it gets closer to us it is expected to get cut off from the gulf moisture and warm air, and it starts losing energy and fades out as it gets up toward Lake Superior.

The models show the snow starting here late Thursday night, with remnants hanging around with light snow until Saturday morning, or in one case, Saturday afternoon.

The NWS forecast discussion mentions that travel may be impacted Friday morning with moderate bands of snow and some wind. I can see that, especially earlier in the storm when it still has some energy.

I checked Green Bay weather and they are expecting 1″ Thursday night and 2″ Friday. With a high of 30 Friday road salt will be very effective. Between that and only 2″ expected Friday, hopefully it will work out better than it sounds for travel.

It doesn’t look like the RXL will be my date for the vintage ride, but I will still be there on the Indy Trail. The RXL won’t be down for long but my schedule doesn’t permit much shop time between now and Saturday. I doubt that I could pull it off. No big deal. I will be glad to have it right, and I have a new clutch set up on the way for it when it’;s ready.

The trails are nice. We should have a good weekend ahead for weather, and even some fresh snow to play in. Ride ’em while you can.

That’s it for today. Have a good Thursday and thank you for visiting!