We are still pretty buried in snow. Most of the schools around here either are closed today or started with a two hour delay.

This morning I went and checked out a driveway that needed plowing as a second truck this morning, and wow. A half mile of knee deep snow that you can stand on, and it won’t push more than about 10 feet. The reason that we needed a second truck is to pull out the first one when he gets stuck, which happens a lot. As soon as you stop in the snow the tires sink and make icy dishes that trap you. There is also a dandy ice base from the water settling out of the snow (pic).

I am sitting here wondering what the right tool for the job is.. Even a payloader would be slipping around on the ice, although that would be the right tool to move the snow. Maybe one of those Sno-Cats like they have at the ski hill and sno-cross races would do it. It is a pretty big mess around here and a lot of people will come up to impassable driveways. If your snow plow guy wants double for this storm, you are getting off cheap.

There is still a lot of snow in the trees and it is making the world very scenic. There are some sagging power lines too, so keep an eye out for those. 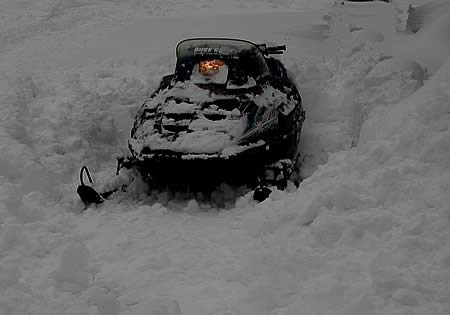 Today I dug the sled out and actually rode it around a little to beat a circular path. The shoveling was intense, but I got ‘er done. I shoveled and stomped down a runway to get up on top of the snow. The skis were stuck in the ice and it took some pounding with a 6# sledge to get them loose enough to lift and free. With my running start I managed to get it out and up onto plowed driveway. It was still a little cold and it bogged a little when it hit the deep stuff, but with some choice words and a little pushing I made it.

I made my circle path and ripped up and down the driveway a few times, and was pretty well convinced that it was time to ride. As I made my final rip up the driveway I was met with a big sweet smelling cloud. It was way too much to be the snow burning off of the pipes, and I know that smell. An opening of the hood confirmed my suspicions..

While not amused, I am thankful that it happened right before the ride and not 100 miles into it or ten miles into some woods riding alone. It isn’t that bad of a repair, but it doesn’t fit today’s busy schedule, so I am sidelined for the moment.

The Friday storm is still a guess. The models range from a 1-3 or 2-4 up to another big storm depending on the path of the storm. The most common scenario is the one that keeps the low to the east, and that would be the 1-3 or 2-4. Murphy’s Law would suggest that we are looking at 10+ since we are still trying to manage the last storm’s snow.

The one trail that I did see looked nice. It had laid down really nice and smooth. I heard about some spots where the groomer was struggling with the deep snow too. With the wet packing snow and the considerable traffic expected this weekend I expect that the grooming crews will have their hands full keeping the whoopties in check.

Ron asked if the River Road Riders trails would be open. Here is what their web site says about it..

CAUTION !!!!! Even though much of the area saw 12″ of snow last night…….it is currently raining in southern marinette county. SOME of the property gates are being opened today on the RRR trails. NO grooming can take place until temp drops below freezing. If the temp drops, limited grooming may take place. Please keep in mind that there has been NO grooming yet this year, so even tho gates may be open…….EARLY SEASON RIDING CONDITIONS EXIST. swamps are open. ditches have not been filled in. and some gates may not yet be open. PLEASE USE CAUTION !!!!!

As far as roads, the county road was cleared and salted pretty well. The town roads have had a pass or two with the plow. Private roads plowed by the town remain socked in as they work on town roads first. The coating on the town roads will be nice for snowmobiling.

One last item, expect some company if you come to ride this weekend. A lot of people will be out on the trails. Take each corner like there might be a family or a warden on the other side of it, because there there is a decent chance that there might be one. All indications are that it will be a very busy weekend.

That’s news for today, have a good Thursday and thank you for visiting!