It has been a really nice week in weather. We have had highs in the 50s that might have reached 60 a few times, along with sunny weather. Today is last call for that.

When we last visited I talked about a near miss of the storm that came by yesterday and last night. That one did give Minnesota and the western half of WI some rain yesterday. Here it stayed nice.

The front actually came through overnight, and I happened to be driving home  on a back road when it did. It was pretty strange. I was driving along and came into a couple of large hard falling raindrops. They hit so hard that it sounded like acorns or hail. About a quarter mile later it was raining so hard that it was difficult to see with the wipers on high, even going slow. That lasted about 1/2 mile, and it stopped, leaving only a little very light rain, which was gone a mile later. It was not much of a storm, but it was really enthusiastic about it for that little stretch.

There is a storm on tap for the weekend, along with some cooler weather. The storm is following a pretty close path to the ideal path for a snow storm, but there is not quite enough cold air involved in it. Our ideal path for a snow storm would have the low  pressure area track between about Chicago and Sheboygan. This one will track about over Green Bay heading NE according to the latest.

Between it not having cold enough air in the upper levels and the storm path, we are likely to see mostly rain out of it Saturday. There is a chance that it could bring a little snow, maybe even an inch or so, to far NC WI. We could see a few flakes mix in, especially on the back of the storm, but it looks like mostly a rain event. Look for the rain to start Friday and keep going until late Sunday. After Saturday night the NWS adds a mix to the forecast, with just light snow for Sunday night. Look for temperatures in the 40-45 degree range with lows in the mid-30s. Sunday night that cools a little to the upper 20s.

The storm that I have been keeping my eye on for our first real snow is the one for Wednesday or so. It is not a big or powerful storm, but the models are showing it cold enough for it to be all snow. I am keeping an eye on that one as a good chance of our first accumulating snow if the weekend storm stays rain. It probably won’t be a lot, maybe 1-3″, which isn’t likely to last long since the ground is not frozen yet.

Beyond that storm the GFS is showing colder and very unsettled weather between now and the deer hunting season. That is pretty typical for November.

We have been having a crescent moon this week, and it was a classic one. The crescent showing was tilted to the lower right, and some passing clouds made it a classic fall eerie moon.

When I was out driving last night the deer were out in force. There were a couple of e-stops as the dumb ones wandered into the road. I did see the little buck that I have been encountering, and he is still playing out in the road. He will probably be a nice deer next year. I have been seeing  few more in the daytime, and a lot more at night.

We have some events this weekend.

First up is the Ranger City Riders Game Feast, Vegas Night, and Gun Raffle on Saturday. In addition to having a wild game feast, they are also having a raffle where you could win a trip to Vegas, a trip to a local casino, or a trip to Wal Mart. After that they are raffling off 20(!!) guns. Actually two are bows, so 18 guns & 2 very nice bows ( PSE & Quest).  Anyway, this is a big event and the prizes will be flying. This is also a key fundraiser for the club.

On Saturday there is a Bear Point Sno-Cruisers meeting at The Bear Point Yacht Club at 9:30am.

Last but not least there is the Snowmobile USA Snow Show in Green Bay Friday and Saturday.

Something of interest to many.. The reconstruction of Hwy A in Crivitz is getting close to done. The latest update said that you could get through there again this weekend, though there will still be work going on. You probably don’t want to rush it tho, they have had some problems with people going through the barricades, and now law enforcement will be taking notice when you do. Wait until it opens.

I have been a very busy guy the past few weeks, and the page here has been neglected as a result. I hope to change that very soon. There are quite a few people that have already sent in donations, and it is absurd that I am not up to date on posting that. I also really do not like this template. It is a little too blue & round. That will be changing soon too. I am hoping to be getting on that over the weekend, but that is starting to fill in too. I have a radical concept in mind that I am not sure that I can pull off. It is pretty involved, and with the high traffic here, it has to be bullet proof. That is one of the delays.

Work around the house has been coming along. I took advantage of the nice weather and worked on a lot of different fall preparations this week. There is still plenty to do, but I have been driving hard to get ahead of it, and there is success to look back on.

At the same time I have been stepping up the computer repair business. A little known factiod.. Silvercliff.com, the beginning of all of this, was a gift to myself on the one year anniversary of my old computer building business, Northwoods Computer Crafters. I started that 12/8/1997, and Silvercliff.com came a year later as a bonus for surviving the first year. A year after that I started the snowmobiling reports, and the rest is history.

Anyway I’d like to pick up a bar tending job, but with none apparent, I have put a new emphasis on the computer repairs. That has been going pretty well. I have a new Wifi access point at Hilltop Resort, have done all sorts of virus extractions and repairs, and building several custom video surveillance computers are in my immediate future.

With all of that going on I have been neglecting my sleds. I have heard two of three run, and they move, but that is about it. I have a couple to strip and E-Bay parts on, and hopefully that will turn into a December and January with a little fun money in my pocket. At the same time, the ones staying in the stable this year will need standard preseason attention. I have been working hard moving toward it. I am pretty sure that I could add fresh gas and jump on 2 of 3 and go now, and with the addition of a battery, number 3 as well. That isn’t a good bet, so I have been looking toward getting in some more shop time.

One final thing.. a screen saver. Many of you will recall a screen saver that I put out about 5 years ago with pictures from sno-cross at Eagle River. I was looking through snowmobiling pictures for a project a while back and found it. Here is a link. Click it and save the file. Click the file and it will preview and give you a chance to make it your screen saver.

Well the sun sets in 97 minutes. I am off to throw in some firewood and cover stuff up for the weekend rainsnow before it does. Have a good weekend and thank you for visiting! 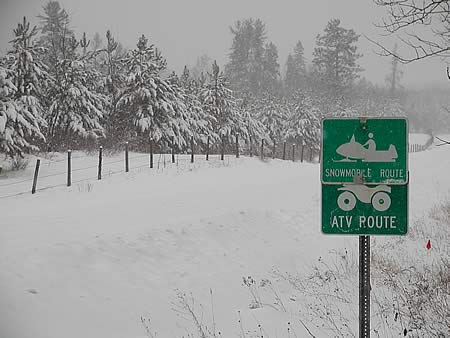