Work kept me busy well into the afternoon. At that point I decided to go with it and pull a double and take the day off tomorrow. I am planning my typical 32 run in the am, followed by shop and ride time.

I only saw the trails between here and the gas station and they looked good.

The latest on the storm doesn’t look as bad as it could be. The rain should be minor and scattered on Thursday and the warm up only to 40 or less. The precip forecast has us in the 0.01-0.1″ band per 6 hours.

Friday they are still pushing the storm too far west, leaving us in the rain until most of it passes. The latest GFS has it close enough to hope for 3-6 before it goes. Current estimates are a bit lower than that.

It was not all that warm of a day yesterday. There was a little wind that kept an edge on temperatures. As a result there was no melting going on. So far so good.

The late week storm is still a question mark. Right now my best guess is that Thursday will start with the warm air when it goes into the mid or upper 30s, and an increasing chance of scattered rain.

Thursday night into Friday looks like more warm air. For most scenarios  the warmest air and most of the rain comes Friday.

The models have been showing a variety of scenarios for this storm. Consistent among them is the warm air. The rain chances, timing, and amounts vary by forecast.

Right now the NWS is going with light rain or freezing drizzle for precip. Temps start in the mid-30s Thursday, don’t fall much overnight, and end up in the upper 30s Friday. Friday night they have the temperature dropping to plus ten, and a cold windy day in the teens for Saturday.

The NWS is warning about other possible effects. When the rain starts, temperatures at the surface will likely be cold enough that it will be freeizing rain for a while Thursday. Friday night when temperatures drop, moisture and meltwater on the roads could make them icy. The big warm up and moist air meeting the snow should make a lot of fog.

Right now my personal prediction goes with the two storm scenario. The first one will bring a little scattered light rain, mid-30s, fog, and freezing rain.

The place where I part company with the pros is on the second low pressure area. The most recent GFS has the low tracking a little farther east, and a lot more cold air mixing in. I am still expecting warmth and rain Friday, but I see that storm turning into a possible snowmaker. Note the second low farther east and the -20C band close behind. Yesterday Low #2 was shown going over Northern MN and the -20 band wasn’t there.

Two things guide my theory. One is that the models are showing the warm air not as strong as it was previously, and the 0ºC line at the 850 level only reaching a little north of Lake Superior instead of all of the way to Hudson Bay.

The other is that the most recent model run is showing a good bit of cold air behind the storm. I see the low tracking farther east than shown above,  and more cold air wrapping into the storm for Friday afternoon. That would make a decent snow storm.

The HPC is a little more pessimistic. Their latest shows the storm tracking west of us (rain) and warm temps of almost 40 Thursday and close to 45 Friday.

I don’t know. No one does. It could end up being a minor melt followed by a lot of snow, it could be a big rain and thaw fest. We will just have to wait and see. It could turn out to be a great weekend.

I got some shop time in yesterday but did not ride. The pretty RXL had a driveline binding issue. It turned out to be a rock trapped between the track and tunnel. 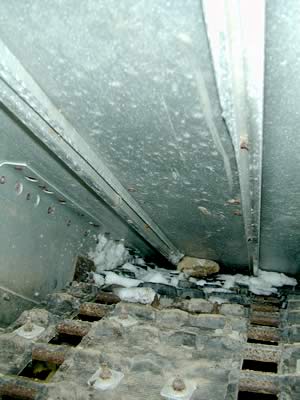 In theory it would be a 20 minute job to pull the chain to isolate where the binding is, and once established that it was down by the track, drop the back two suspension bolts, swing the back out and pull out the rocks.

Not on this cursed beast. It is so pretty because it was storage for a long time. Every little nut and bolt was a war. I cured it of most of that last year, but she still had some fight left in her. I spent all afternoon pulling the rocks and doing the pre-season check over and still have at least an hour of work before hitting the trails. In theory that will be late this afternoon.

That is it from here. Have a good Tuesday and thank you for visiting!