The warm temperatures and rain are behind us for now, and it feels a lot like January again. Yesterday was a cold day for sure, and there was a bite to the wind.

The thaw and rain were not good for our cause. There are a lot of places that retained trail base and the rain turned that into a brick of ice. There are also a lot of areas that got taken down to mud or gravel and will be starting over from bare ground.

In my travels yesterday it looked like the mud and gravel were winning. There were stretches along F that held good base. The forest roads looked like they held base from what I could see. At the same time most of the railroad grade along 32 (NST) was down to gravel or very close to it, and any trails that were thin washed right out to mud or gravel.

The bottom line is that there will be good spots but we are pretty much starting over for any kind of system-wide riding. From what I am seeing, it is not unique to our area, but just about statewide.

While better than mud and rain, the weather outlook is not much in our favor. We are looking at a couple of clippers in the short term and the temperature swings that come on either side of them.

Temperatures will climb a little early week in advance of a clipper for Wednesday. We are looking at upper 20s today and lows in the low teens tonight. That adds about 10 degrees from yesterday and last night. The clipper itself might bring an inch of snow if it goes well.

The same thing happens with Friday’s clipper. Friday’s high will be in the low 30s, Sunday and Monday of next week look like a hi/lo of +5/-5. That one could bring a little light snow Friday and a better chance for Friday night-Saturday that could go 2-4 or 3-6 if it plays out right.

Behind that it looks like we are in for the coldest weather of the season so far. If you don’t like the cold, you won’t like next week. There are a couple of pushes of cold air that look like they will put us into single digit high temps and negative numbers for overnight low temps.

Farther out in the GFS model there is another small storm for the 27th or so, but no big storms are being shown over the next couple of weeks.

It is my predisposition to look for the good in it, and there is a little. We will at least get a decent frost in the ground and a better lid on the lakes. We did not have any frost in the ground when the 9-11″ snow came, and the lakes were only partially frozen. Most of the lake ice sank under the weight of the snow and flooded it. I was turning up unfrozen sod plowing the driveway.

Now with the lakes pretty much bare and much of the ground in the same shape, that January cold will firm things up. That will be a good thing, especially with the radar runs and winter events coming up over the next few weeks. It would be better if a week of it was followed up by a foot or two of snow.

The cold weather and frequent north winds will be good for the lake effect snow regions near Lake Superior. I have seen forecasts of certain favored areas getting as much as two feet over the next week to ten days. Exactly where those areas will be and how widespread the snow will be remains to be seen.

There are some events this weekend.. 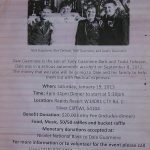 There is a benefit at Rapids Resort for Dale G, and that is going to be a big affair with live music and dinner, raffles, and all kinds of stuff. Dale is a good guy and a friend, so I will be there. It is $20 at the door, and it includes dinner and 6 raffle tickets.

Dale got into a car accident last Fall and got hurt pretty bad. I can see already just from the planning stages that this will be a big event.

Here’s another local event. It’s a fundraiser for a scholarship fund created in memory of a high school student who passed away suddenly in 2010 from a bacterial infection. 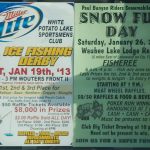 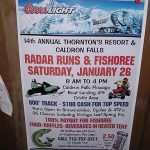 All of the raffles at the radar run benefit the Stephenson VFD, and the Snow Fun Weekend is the Lakewood club’s primary fundraiser for the year.

Well, I have a day coming up where the list is about two days worth of stuff, so I am off to grab it by the horns. I will be back tomorrow. Have a good Tuesday and thank you for visiting!