Usually this weekend is the greatest show on snow- Haydays. They are not having it this year due to the virus thing. There is what they hope is a pretty close replacement event at the Eagle River derby track. Here is a link.

There has been some wild weather out west. A huge heatwave has been hitting the west. Now a huge cold front came through with a lot of polar air behind it. A station in Colorado showed a 57 degree temperature drop from yesterday to today. They were in the 90s, now there are winter storm warnings the next day.

A Facebook friend in Wyoming had a similar story. He said that it was in the 80s yesterday. Here is his deck this morning. 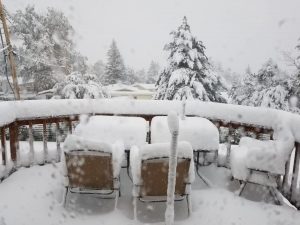 If you recall last winter came on mean and early leaving me with a lot of unfinished chores. It could be that we are headed for a similar fate this year.

Last year we had an El Nino neutral year with the maximum sea surface temperature anomaly of 0.6C. Right now we are about that far on the cold side. The current guess is a 60% chance of a LaNina year. Neutral winters are usually good winters for us.

The past few years have been exceptionally wet. The Peshtigo River where we whitewater raft set almost daily records this summer. Zero on the bridge gauge represents a normal summer flow. This year I think that the lowest that it went was about a +5″, and they had great rafting all summer. I haven’t seen that in 30 years on the river.

A lot of that was buildup of water in the wetlands that make the Peshtigo’s watershed from big snow winters and wet summers for the past 3+ years. There is nothing to make me think that the wet weather is going to suddenly stop.

At that point I am expecting another big winter for us. Hopefully we will get as many good riding weekends in as we did last year. I need to point out that I am kind of expecting a wild ride with rain, ice, big temperature swings, and heavy snow like the past few winters.

One last thing, get those club memberships renewed. It can take a month or so to get the cheap trail passes once you join the club.