Greetings and welcome! Suprisingly we have a lot to talk about today. Strictly from commercial… Yesterday I got a call from Deb over at Fisher’s Camp. She is one of the new owners and they needed a web site. We headed down there and met the new owners who are very nice. They are open daily except Monday, and they have small 1 BR cabins ready to rent now. 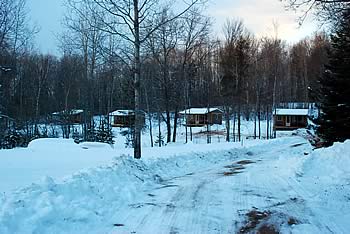 The happy hour specials were quite inviting, and while I was there quite a few old friends walked in. It was hard to show the discipline required to go home and work overnight. At any rate, Chris will have a new web site for them in short order, they are the newest sponsors of our Big Snow Page, and you are encouraged to stop in on the way by. Fisher’s Camp is at Boat Landing #10 on Caldron Falls Flowage, and the trail on the way there is nice. While I was there I got to talk to some ice fishermen, and I checked with another later on to try and lasso some ice condition reports. The bottom line here? I am gonna need my Mr Yuk stickers back. The bay that they were fishing had about 10″ of ice. The top three was rotten and described as waffly. The bottom 7 were nice ice. Observed first hand was about a foot of snow and slush and water on top of the ice. 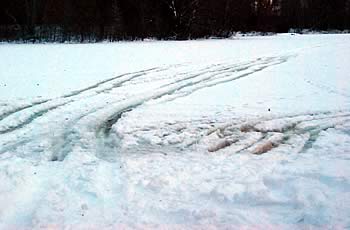 Anyone seen my  longjohns? I am not sure how excited to get about this yet. You guys have heard of El Nino right? One way that it is predicted and quantified is by the ENSO, the El Nino Southern Oscillation. It is one of many such oscillations. Here in the northern hemisphere we have the Arctic Oscillation (AO), The North Atlantic Oscillation (NAO), and the Pacific Decedal Oscillation (PDO), to name a few. Some who follow this page early saw me write about the PDO going negative, and that it might change the effects of El Nino. Well, apparently it is a little bigger than that. The NAO has turned sharply negative, and now the Arctic Oscillation has gone sharply negative, possibly into near record territory. So? Well.. the negative phase of these oscillations is also considered the cold phase. With all of these oscillations lining up in the northern hemisphere just so, it is likely that the flood gates of the Arctic are about to open up and introduce a lot of people to winter. After seeing an article on it, I took a look at the GFS for the next few weeks and golly.. When we are looking for the rain/snow line in a storm, we look at temperatures about 3,000 feet up, at the 850MB level. Usually we want to see it at about -4C to make snow. The GFS is showing the -10C line on 1-7 so far south that it is in Alabama right at the Florida state line. If there were precip, it would be cold enough in the upper atmosphere to snow at Disney World in Orlando, Florida. Excitable boy you say? Probably, but read this.. Yesterday, Senior AccuWeather meteorologist Joe Bastardi let loose with this stunning prediction on the AccuWeather premium web site via Brett Anderson’s Global warming blog:

What is facing the major population centers of the northern hemisphere is unlike anything that we have seen since the global warming debate got to the absurd level it is now, which essentially has been there is no doubt about all this. For cold of a variety not seen in over 25 years in a large scale is about to engulf the major energy consuming areas of the northern Hemisphere. The first 15 days of the opening of the New Year will be the coldest, population weighted, north of 30 north world wide in over 25 years in my opinion.

Very interesting. I got a few miles in and feel a lot better now. Have a good Wednesday afternoon and thank you for visiting! RJB