Yesterday mostly involved work, but I got a look at a few trails in my travels. From what I saw the trails groomed out pretty nicely, and with the ice base they should stay that way for a while.

When the mess from the storm froze in last night I was expecting the ground to be a 2″ block of ice. It ended up that there is a very nice ice layer for sure, but with some crunchy snow on top of it. It also snowed a little overnight. There is definitely a base of ice, but there is also a little traction and free snow too.

It will be a slippery base, but I don’t expect to see much dirt for a while. The worst of it that I saw was where there were puddles and they got broken as they froze. Those will be a little rough.

My prediction that the side roads that are snowmobile routes would benefit worked out from what I saw yesterday. The one side road was glare ice with a little snow on top. You wouldn’t be in danger of dragging any carbide, but again the broken puddles brought a rough spot or two. Those dotted like trails ( town roads and forest roads that are snowmobile routes) should be very viable this weekend.

The towns use a sand mixture with a minimal salt concentration to treat the roads, and on the back roads it is pretty minimal coverage. It would take a lot of it to be a match for the ice base from this storm. The roads that got plowed while it was sloppy will still have a nice ice layer, the ones that didn’t will be thick with it. The downside is that whatever was there when it froze is there now, ruts, chunks, broken puddles, whatever.

There are some puddles. Any low spots that can gather water did. Some of them are pretty big puddles. Those will be frozen, but might bring rough or slippery spots.

Beyond that I think that the messy storm was an overall benefit. The trails were in good shape when it rained, and now have a lot of base. The couple of trails that I saw looked like they groomed out pretty nicely, and reports from Dun-Good say just that. The side roads definitely have a layer of ice.

This is the time of year that the sun becomes a factor. My hope is that the ice base will buy us an extra weekend or two. March is only two weekends away.

So we had an inch or so of crunchy snow from the storm on top of the ice and a little light snow for Tuesday morning. Tonight into Thursday we are looking at a clipper that could bring another 1-3 or 2-4. Right now it looks pretty good for us to be on the higher end of that.

Today we are looking at 35, and tomorrow low 30s. Behind the clipper is a typical cold weekend with highs in the 15-20º range and zero to +5 for a low.

I missed posting a picture of a group that was in last Saturday. My most humble apologies. You guys please let me know about stuff like that, yesterday’s date of 3013, or spelling it Sliver Cliff. Again my apologies. 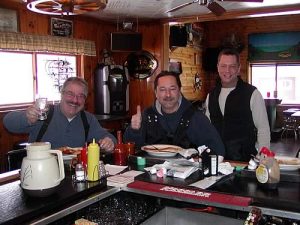 One last tip before I go.. tomorrow (Thursday) is St Valentine’s Day.

Have a good Wednesday and thank you for visiting!