We have some stuff to talk about today.

First up yesterday’s snow only added up to an inch or so. It wasn’t much but it is fresh snow and free snow for the trails. I will gladly take it.

Today is a windy day with so far a high of 18. Yesterday was much nicer with temps in the upper 20s. Late last night the temp got up to 33. Shortly after there were a couple of big roaring gusts of wind as the front passed, and we headed down to a low of 11 at about sunrise. A 22 degree temperature drop in 6 hours is notable.

The snow isn’t going anywhere before the weekend. Today we have peaked out at 18. Tomorrow and Friday should be in the low teens with lows below zero.

Friday night into Saturday we will see our next clipper and some nicer temperatures. Look for a couple of inches of  snow and a high of 21 Saturday. The cold air from that clipper will come Sunday with a high of only 14.

We are in a fairly stubborn pattern of arctic cold air and weak or near miss clipper systems every few days. That looks like it will stay in place for at least a week and probably two. At least it isn’t melting.

We have pretty nice trails with a good base and some shirty or blown out corners. Some of the heavy traffic trails are getting stained from being worked. Most of the trails are really nice. I wouldn’t hesitate at all.

Next up is that there is a radar run Saturday.. 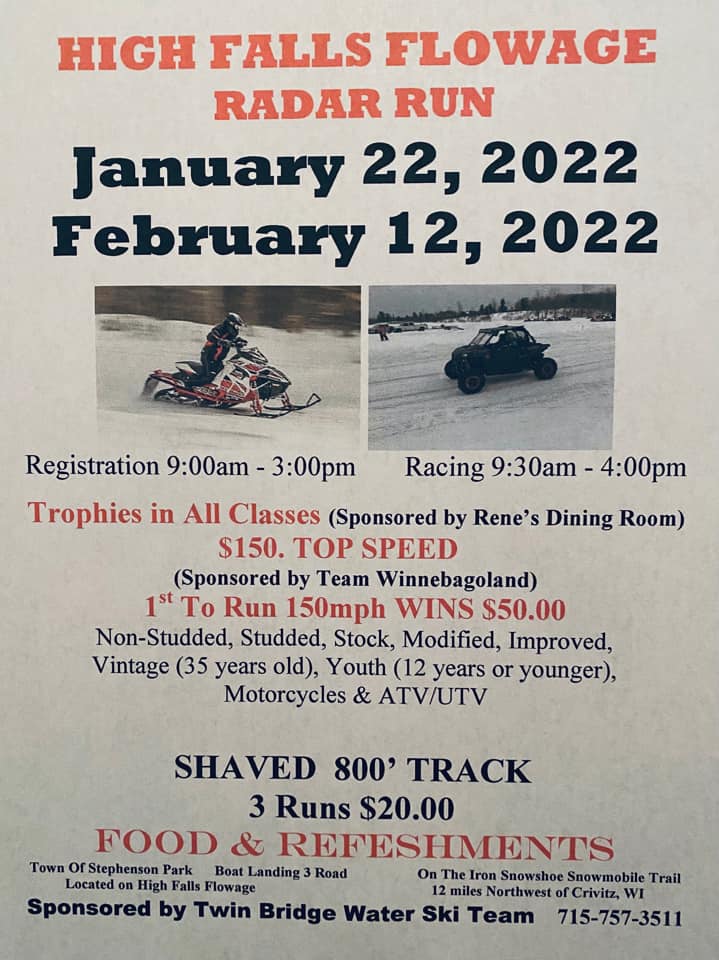 There is also a Team Winnebagoland ride up by the Four Seasons Resort in Pembine. Rumor has it that there will be 100 plus ATVs/UTVs on the various rides. If you are into the winter UTV thing you might want to hook up with them. If you don’t like sharing the trails with a lot of ATVs/UTVs you might want to skip those northern trails this weekend. Thanks T.S.!

Next up we are going to talk about volcanoes. Volcanoes can shoot ash into the atmosphere, and if it is a really big eruption, into the stratosphere. When Mt Pinatubo went off it did shoot particulates into the stratosphere, and we saw global dimming that brought cooling of 1-2ºC over the next two years. More of interest to us, those particulates make great nuclei for forming raindrops or snowflakes.

Anyway, the volcano that erupted near Tonga is arguably the strongest in 30 years. Some people got a little excited and said that it was on the scale of Pinatubo. Most disagreed, but it was a significant eruption. Some said that it was bigger than Mt St Helens, and most agreed.

So how big was it? Barometers around the globe showed a series of pressure waves as the waves from the blast propagated across the atmosphere. It is impressive when a volcano in the south Pacific registers in Europe and beyond. Another guy had it show up on his seismograph in New England. That’s a good thump.

Here is a GIF from Spaceweather.com. They also have a good article on it.

This is an impressive shockwave.

Here is a really good video about it too.

So the real question is, will it affect our weather? It might. It is close to the ENSO region where we watch for ElNino/LaNina and it really put a lot of stuff into the atmosphere and shaded a large area of the Pacific Ocean. The hard part is that it won’t be anything concrete where we can point to a storm and say that was caused by the volcano. It is more like putting a can of Super Duper Engine Supercharged Turbo Tune into your gas tank where you are not really sure if it did anything or not.

At any rate it was a very impressive eruption. The Tsunami from it got a lot of press and turned out to be pretty mild. What they missed was that this was possibly the biggest eruption in 30 years and a really impressive event. If it brings us some snow? Bonus!

That’s it from here. Have a good Wednesday and thank you for visiting!