It is pretty clear now that the 2010-2011 season has come and gone. I have seen a lot of places in deep woods and swamps that still held a lot of snow, but most open places are melting off in the sun and getting muddy.

Daylight savings time came last weekend. Usually that is a warning sign too. We are long on daylight as the sun gets warmer. The sunrise today was 7:05 and sunset is 6:58.

It is driveway season now. As the frost comes out of the ground the driveway is getting deep with mud in the sunny spots. That isn’t unique to my driveway, gravel town and forest roads can get a little soft too.

We are going to see continuing progress with that as the temps this week go into the 50s. There are chances for rain Thursday Sunday and about Tuesday. The first two look like less than 1/4″, Tuesday’s might be more.

The soft ground has towns putting weight limits into effect on roads. The road base is soft when the frost comes out and large trucks could damage the asphalt or gravel roads by driving on them while they are soft. In order to minimize the damage, they put weight limits, locally known as the road bans, into effect. This puts loggers, excavators, builders and other large equipment operators off of the side roads for a few weeks while things dry up.

The same thing goes for the ATV trails. The trails close with the snowmobile trails and stay closed usually until the first weekend in May. It depends on how the spring thaw or breakup goes.

The spring pending thing is not lost on the critters. I have seen more deer in the last two days that I have all winter. They are out on the roads and running out of the ditches,  so keep a sharp eye out for them.

On my regular evening walk outside for firewood last night the local coyotes were really yipping it up about something. I forgot to mention it, but I also saw my first moth of the year last week. There were a couple of them, little white ones.

I expect that they will get some company very soon. The moths seem to come out first. Many years we also get some massive swarms of gnats on warm late March and early April days.

I expected this season to be a wild ride with some temperature swings and it was. It went our way about half of the time and the snowfall was not great. We had a good start, then came the thaw. The arctic oscillation blocked us from snow for a while and pushed it south, and the guy from Birmingham was skiing on YouTube.

When we did get to ride this season it was on pampered trails. The clubs were really prompt about grooming, and they did what they could. I thought that they did a particularly good job this year. Townsend especially got repeated kudos.

The lack of snow probably contributed to this season’s lower snowmobile fatality count. This year we lost 16 people riding snowmobiles, the season before it was 21, and in 08-09 it was 23.

The Bear Point Sno-Cruisers and Ron Rost put on a mock snowmobile incident in December. I believe that it was the first one in the state. I hope that they have a lot more, and they probably will. It was well received. I am among those that would like to see it be a part of or have a video of it a part of safety courses. 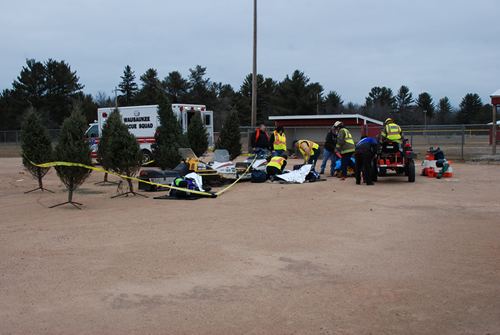 If there was one thing to take away from it it was that even in ideal conditions you can expect rescue to take 45 minutes to an hour and you are still that far out from a trauma center once rescuers get there. Many times we are in some pretty desolate places and it is good to make people aware of how difficult the logistics of rescue are if they get hurt on the trail.

Late this season we lost a good friend when Marty Cooper passed away unexpectedly. He was very active in the River Road Riders and in the Bear Point Sno-Cruisers. He was known for being out brushing and maintaining trails probably more than he rode them. He was always someone that I was happy to see at Slug Feast or club functions, and he was usually there. Smooth trails to ya Marty. A lot of people will miss you.

I have a lot of people to thank for their donations this year. Thank you for your generosity, you are the people that keep this going. I would not have the ability to ride or spend as much time on this if it weren’t for you. Thank you.

To understate things a little bit, I am very unhappy with my performance this year on this website and the other ones like the Sno-Cruisers and Iron Snowshoe. I had some pretty devastating stuff happen in 2010, but as the dust settles and I look back, the smell of failure still hangs on me alone. I don’t like it. All that I am sure of is that 2011-2012 will look very different around here.

I really like what I do here and I love all of the great people that have come together as a result of it. Your support has been great even as I wasn’t at my best. I don’t like letting you down.

Since we tried failure, and quitting isn’t an option, I have my work cut out for me. I have some very interesting concepts that I will be kicking around this summer, and I am quite motivated. I am sorry for not being better at this over the past season.

Some good news to close the report up with.. the price of gas has fallen about 25 cents in the last two days. It is now within 15 cents of the pre-spike levels in February. Now we get to see how long it takes to fall at the pump.

Here is what the futures traders are doing. Click the CHARTS button in the left column. You can usually add 60-75 cents to these prices and get pump prices (taxes, transport, margins).  It looks like the May futures settled yesterday with may pump prices between 3.25 and 3.50. Hopefully it continues to fall.

Well according to Athelstane Weather’s top notch new site, it is sunny and 57 outside.  Time to go outside and play in the mud.

I will be moving my updates over to the summer page starting with an update later this week. Once I post a forward message please join me there.

Thank you all very much!