Winter has come a month early this year. Normally our high temperature is in the mid-40s. We only got up to 33 today, and that is pretty typical of the recent past. Tomorrow we are expecting a high of 29. More importantly we are seeing overnight low temperatures in the low and mid-teens. Last night it got down to 13F, and tonight’s forecast is only a degree warmer.

That all has me scrambling to winterize stuff like the outside faucet, the well house, and the camper. Typically I do that stuff the week of gun deer hunting or the week after. Last year it came two weeks early and had me scrambling. This year it started in the end of October.

The ground is frozen with a couple of inches of frost in it. Small ponds are frozen over and making thickness to the first ice. I have seen some ice on the sides of bigger lakes. Those are getting a head start too.

There have been several snow storms south of Green Bay and down into IL. Yesterday they saw 3-4″. We have not shared in those. We had the 1/2″ Oct 29th and a dusting Tuesday morning and that is about it. There is barely a dusting on the ground in shady areas.

The ground and roads are indeed frozen enough to hold snow. Once it comes our way it will stay until melted by sun or temperature.

Anyway, our cold weather is thanks to a surge of cold air right out of the arctic. It has been with us for over a week and it keeps bringing colder air with each subsequent surge. Some of the upper air temperatures at the 850mb level ( a few thousand feet up) for next week are as cold as -21C (-6F). This does not directly translate to our temperatures here on the ground but it does indicate a very cold air mass. 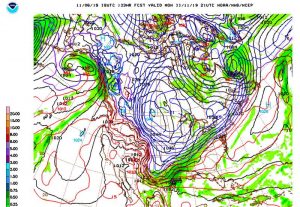 This is a stubborn pattern and it could be with us for a few weeks. If it goes as expected we will have a very good start on freezing up the ground and lakes several weeks ahead of normal. I did expect to see this Arctic outbreak, but not for a few more weeks.

Winter is here early this year.